This weeks episode is a couple days late due to computer virus issues, but, were back and better than ever

Featured on this episode:

See you next time! October's going to be amazing.
Brian at 11:07 AM No comments:
Share


Severe windstorms hit my hometown, knocking over dozens of trees, creating large amounts of property damage, and killing three. We were without power for several days. The result is a slightly truncated Weekly Round Up. Theres still plenty of fun to be had, though; so, enjoy!

We'll see you again next week!
Brian at 11:05 AM No comments:
Share

Reviewed in this episode:

I'm really happy with the first episode and look forward to working on the series.  We'll learn as we go; one issue with this episode is the ceiling fan noise during the Potato Head/markers review, but we'll know better next time!  We hope you enjoy the show.
Brian at 10:52 AM No comments:
Share

Back in 2000 I was 18 and perceivably invincible.  Well, so I thought, that era is defined in my head as a time I spent indulging in excesses.  My friends and I would stay up and sometimes out all night, practically every night, and the future seemed distant and irrelevant.  It was during one of these days of freedom and youthful exuberance I stopped at a gas station on my way to some hang out session, there, just to get some fuel or so I thought, I discovered for the first time Pepsi Twist.  From that moment on we were inextricably linked, or so I wish, as our paths would separate years later due to Pepsi’s cancellation of their wonderful creation.

During Pepsi Twist’s short life span, it became a favorite of mine, chugged regularly and always happily.  Those that know me are aware Cherry Coke is my all-time personal favorite.  While Pepsi Twist never beat it out for that top position, that isn’t to say that I didn’t really, really like it.  Sometime prior to the debut of Pepsi Twist I’d began putting lemon slices into my fountain colas whenever possible.  I did this most frequently at Penn Station, an awesome sandwich establishment, where they serve Pepsi.  Thus, when I first laid eyes on Pepsi Twist, I had a built-in excitement of now being able to buy bottled, or canned, Pepsi with lemon in it, no longer requiring me to manually mix the two together myself.  While that surely sounds like a small victory to some, I was overwhelmingly pleased with the concept.

And Pepsi Twist delivered in the taste department.  For me, I’ve never been a major Pepsi fanatic.  Out of cans, it’s far too sweet and syrupy to be a regular in my rotation.  I do, however, tend to enjoy it from fountains at restaurants.  But unlike cherry, or vanilla, or other flavors mixed in with cola previously, lemon didn’t add to the overtly sweet nature of cola, the fruit’s crispness counterbalanced it making for a real interesting, and delicious, merging of tastes.  Pepsi Twist disappeared suddenly and I was devastated. 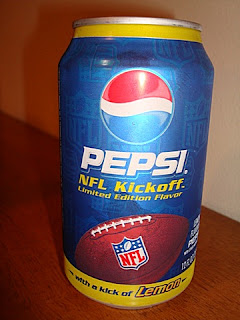 Fast-forward to late in the summer of 2008, I’m no longer as young or as oblivious as I once was, now juggling college, work, marriage, a website, and more.  With my wife’s first official paycheck as an RN (registered nurse) we decided to splurge at the grocery store, something we’ve been unable to do ever, and stock up on some foodstuffs.  I don’t drink a lot of pop, surprisingly; on average I’ll drink one per day.  I usually supplement my drinking choices by slipping in things like iced tea and sports drinks.  While walking through the grocery’s beverage aisle I found what you see pictured above, then nearly shit myself in a mixture of excitement and confusion.  Pepsi NFL Kickoff Limited Edition Flavor?  But more specifically, “with a kick of Lemon”! 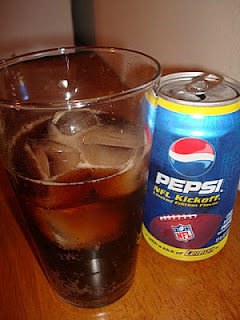 So I rushed home, waited impatiently while my cans of puzzling pop chilled, then poured myself a nice, cold glass of Pepsi NFL Kickoff.  What can I say?  It’s back.  Well, wait, not so fast.  Yes, that delectable mixture of Pepsi cola and lemon has merged again, and it’s available I’d imagine at a store near you, but let’s not start the celebration too hastily.  Reason being, it’s not permanent—nope, right on the cans it reminders you that this is strictly a “limited edition” flavor.  So, I suggest you enjoy it while you can.

I leave this discovery with mixed emotions.  As far as Pepsi NFL Kickoff, as a standalone beverage, I think they’ve done a poor job, especially in the marketing and design categories.  The can, and subsequent 12-pack it came from, both feature very bland, unoriginal designs, not highlighting the yummy lemon (outside of yellow bars across the top and bottom) nor doing up the football connection particularly well depicting one, lonesome football adorned with an NFL logo.   Ultimately, while a temporary harbinger of fleeting joy, Pepsi NFL Kickoff will soon disappear into the realm of forgotten sodas like Pepsi Blue.  I really wish if they were going to bring back a lemon-flavored Pepsi they’d have just brought the pre-established and popular Pepsi Twist back from retirement.  A boy can dream, right?