For fans of Jackass, welcome to the weird and painful world of the "Oh, Brother!" Team. Featuring misled youth like Old Man Raw Meat Face (aka Brian Hammons, webmaster of Review the World), DJ Kaotic, Crippled Serial Killer, Jesse Numbers, Didge Romeo, and more.
In this episode the boys go to out for an unconventional day at the woods. Watch as they tumble down hills, hit each other with logs, jump into all sorts of bush, get muddy, get wet, and of course, get hurt! This video is a trip down memory lane to 2002, when things were simpler, and we had a lot less scars!
Posted by Brian at 11:51 PM No comments:


The third annual halloween special and one of our best ever! All kinds of fun stuff featuring Tim doing baking, Brian reviewing random stuff in downtown Indianapolis, and tons more!
Posted by Brian at 12:22 AM No comments:


Review the World webmaster Brian invites us to join him on a "redneck picnic" getaway, his first venture outside his apartment since being quarantined a week ago with the dreaded swine flu.
Posted by Brian at 10:19 AM No comments:

Airheads - Batman: The Brave and the Bold 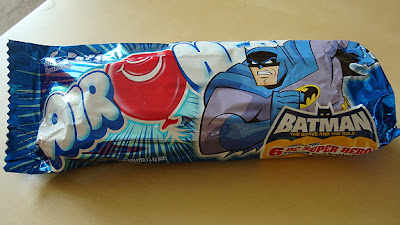 Stranded at home on a “sick day” away from classes I feel it’s my duty to bestow upon the Internet an article heralding Airheads’ latest candy concoction calamity.  Everybody doesn’t’ love Raymond.  Hell, I don’t even know who he is.  But, assuredly, everyone does love them some taffy.  This isn’t the first time Airheads has hooked up with pop-culture, they’ve done it plenty of times beforehand, including devoting entire packages to The Spiderwick Chronicles and Cars, as well as a special taffy flavor dedicated to the film TMNT (which I reviewed here). 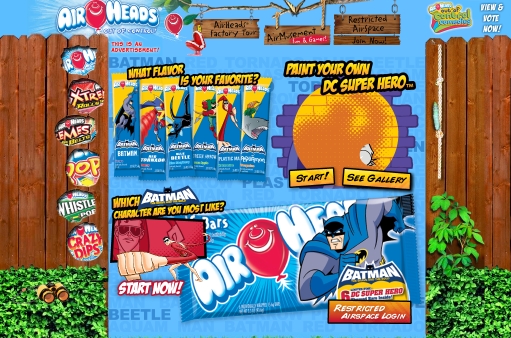 This time they’ve really went overboard with the promotions, take a look at the splash page of their official website, it’s been taken over by Batman and his crime-fighting chum.  There’s even activities you can do, and trust me, I did. 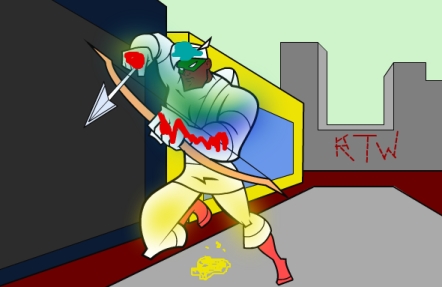 I would have had this article finished hours ago had I decided to not spend time working on each and every excruciating detail of my masterpiece—a new version of Green Arrow, he’s African American, rocks some sort of airbrushed attire, and judging by the puddle underneath his feet isn’t quite confident enough yet for being a hero.  There’s also some inconspicuous building in the background with the initials “RTW” on the side of it.  I wonder what that’s all about.  There’s also a personality quiz you can take which determines which of six characters you’re most alike. 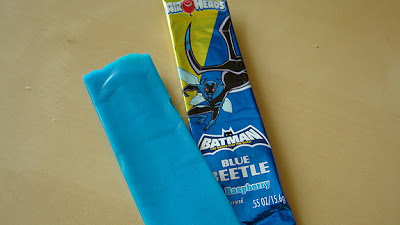 First up is Blue Beetle and wouldn’t you know it he gets Blue Raspberry as his personal flavor.  This fits, no qualms, not to mention it’s arguably the best flavor in the entire history of taffy.  Its reminiscent to me of a blue raspberry Slush Puppie which was my favorite flavor to drink as a child as I rode along peacefully in the shopping cart while my mom got groceries. 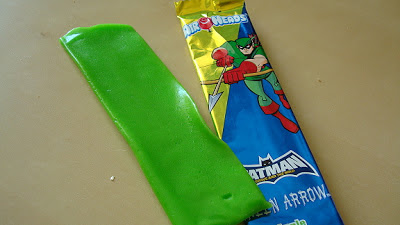 Green Arrow gets Green Apple, which also works splendidly.  I’m usually not a big fan of sour flavors, which undoubtedly in candy aisles green apple always is, but since I made a mockery of his likeliness above I promised to eat this entire tuft of tart taffy. 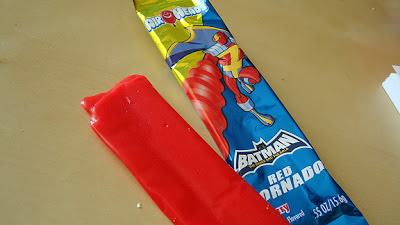 Red Tornado I remember fondly from childhood as kind of an unsung hero in our toy collection.  I could never really attribute his awesomeness to anything particularly but he, along with other oddballs like Dr. Fate, had a special place in my gang of good guys.  He gets Cherry, and while I know its dreadfully cliché as a flavor, you can’t really argue against it as in terms of pure taste most would concur it’s the best of the batch. 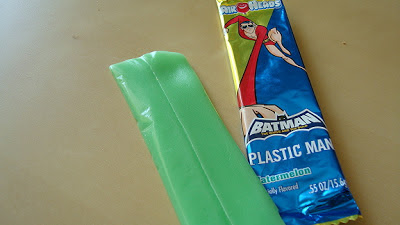 Things starting getting odd right about… now.  Watermelon for Plastic Man?  Really?  Really?  Those with a keen eye (and good memory) will know that this isn’t the first time this particular flavor has reared its brilliantly hued color on this very website.  Years ago I reviewed Watermelon, in an article that actually predated the dot.com days of RtW, but appeared here in January of ’05.  I likened it to a dolphin phallus for those keeping record at home.  I was not above childish barbs back then in the comedy landscape of 2004.  I don’t see the connection to Plastic Man whatsoever.  In fact, with it’s sea algae-like color, I really believe it would have been a better fit for our next superhero… 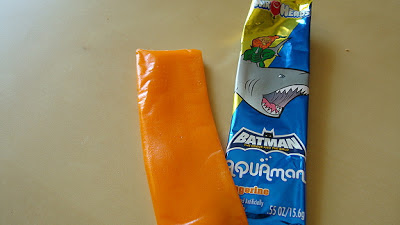 Aquaman!  He’s the brunt of many a brutal joke in fan circles but I’ve got to admit his was the flavor I was most looking forward to tasting.  I’ve been a fan of tangerines since my childhood.  Every Christmas my grandmother (amongst other things) would give us a giant cornucopia of fruit to bring back home with us.  It’s then I developed my fascination and adoration for the fruit.  I’ve got to say Airheads did a pretty good job, its not as much fun as eating the real thing, but a decent slap bracelet-sized facsimile. 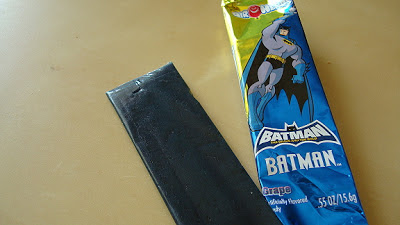 Lastly, but certainly not least, is Batman with Grape.  This is another rare, or not everyday, flavor of Airheads taffy.  Its quite dark, which is suitable for the Dark Knight, and upon scratching my head in lieu of actually thinking hard about it I can’t come up with a better flavor in substitution. 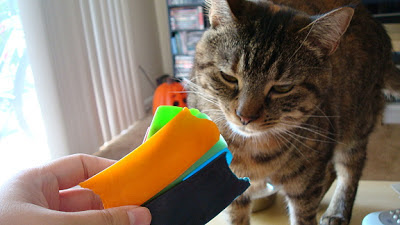 Of course, per usual, my cat Tomo wanted to get involved with the proceedings.  I offered her a lick of my monstrous amalgam taffy.  She declined, and after leaving the room for a few minutes, returned only to find my cherished tangerine taffy now had a sizeable amount of cat hair stuck to it. 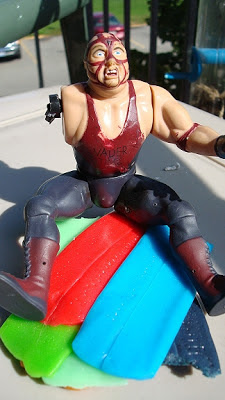 Vader:
I thought there was supposed to be tangerine taffy? 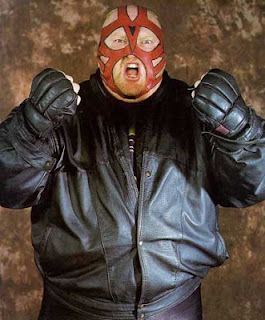 Vader:
Oh, you think its funny?  You think you’re an everyday Deon the Distasteful, eh?

Overall Grade: B
Posted by Brian at 9:59 PM No comments:


The debut episode of a new, ongoing series dedicated to reviewing all of the small, under the radar, Chinese restaurants we can find. In this episode we check out Dragon City in Cheviot, OH! Paul battles the disturbingly odd lobster sauce and child labor laws come under question!
Posted by Brian at 2:52 AM No comments: