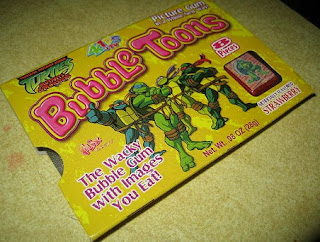 I’m not entirely sure how the Teenage Mutant Ninja Turtles end up on my site so often.  Perhaps I’m charmed by their love for pizza, or, maybe it’s their knack for stopping evil by kicking it in its collective face – either way, I’m a fan ‘till the bitter end.  For Valentines Day a couple months back, my fiancé satiated my inner-nerd once again, by giving me some bubble gum that featured crude pictorial visages of my favorite green homeboys.  Surely she loves me, as nobody goes out of his or her way to purchase something this ridiculous for someone else just for the hell of it.

The packaging itself provides several solid minutes of entertainment, or perplexity, depending on what makes you tick.  They use the term “Picture Gum” as a sort of innuendo, as it’s both the start of a sentence, as well as an allusion to the gum’s unique gimmick.  The tagline states that this particular gum is “Wacky” which will surely persuade those who can’t decide if they want a chocolate bar or the gum with the goofy pictures on it.  “Let’s see – do I want to be munching on a Snickers while in traffic or incessantly chewing on a fucking mediocre rendition of a cartoon character – well, shit – I can’t decide!” 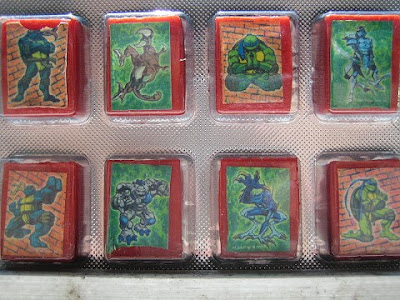 Here’s the rogues gallery – a bevy of turtles and second-rate villains.  This is apparently under the “Mutants & Monsters” sub-category, which leads me to believe there might be other series’ of this gimmick gum, but I don’t really want to find out.  The taste is strawberry, which does little for me, but there’s no alternative.

Let’s take a closer look at some of the caricatures of characters I’m considering eating.  First off, we’ve got Leonardo who appears to be praying – no, not for a new sword or the destruction of that embarrassing sex tape he made with April ‘O Neil, but that I don’t eat him first.  Next, take a look at lead villain Shredder in all of his (or if you’ve been watching the current cartoon series it’d be “her”) shiny sinewy glory.  Since Shredder’s rival, the wise rat Splinter, was so disappointingly not given his own gum caricature, I shall eat him first to restore a bit of balance in this sick world.

In perhaps the stupidest thing I’ve done yet for my website – watch me chew bubble gum.  Or, watch my teeth tear apart the nefarious Shredder – now that sounds much better! 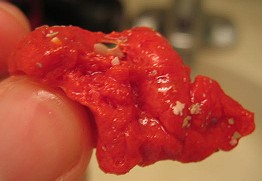 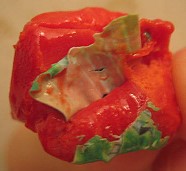 In the end, there’s a lot going on here, but none of it really works.  The gum isn’t even good.  That’s a major issue I take with it.  Now, perhaps if the gum would have been edible, I would have had a lot more trouble finding fault – however, the gum is wretched.  It somehow manages to be too sugary yet too bland at the same time.  Now, it could be in part due to having sat around on my desk for a while, but the caricatures don’t even properly dissolve.  Even after eating the gum for twenty minutes, you’re still stuck with speckles of what was once a crude portrayal of Michelangelo.   I know that she meant well, but unbeknownst to her, I gave this “Picture Gum” to a bum outside of our building.  I asked him if he ever wanted to chew on a monster – he said he had the night prior under a bridge for $40, but would only charge me $25 seeing as I’m such a handsome guy.

Overall Grade: C-
Posted by Brian at 4:54 PM No comments: 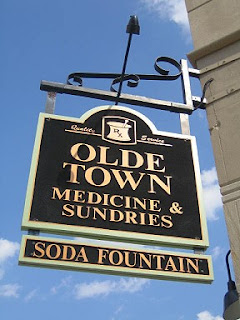 With a name like this undoubtedly you’re thinking I used a time machine to go back in the past and visit one of those old-fashioned soda fountains of yesteryear.  Well – yes and no.  First, if I could travel backwards in time, I wouldn’t be sipping on a chocolate shake; I’d be teaching Abraham Lincoln how to breakdance and spending time getting to know the misunderstood brontosauruses, offering a hug and empathizing that somebody does in fact care.  My restaurant radar went off when an anonymous tip to check this place out came into the offices one afternoon.  I jumped on top of my desk and did an impromptu dance – my secretary spit her coffee out and quit.  On an aside, if there are any 18 to 28 year old females with knowledge on cereal promotions and obscure cartoons please contact me immediately. 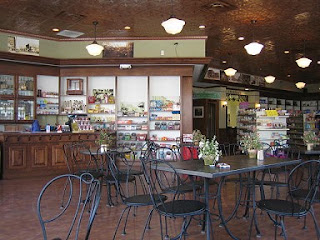 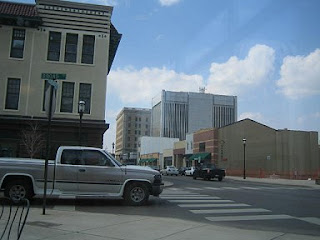 Just look at the interior of this place – it’s an actual drugstore and retro candy cornucopia, too!  You can get vitamins and bandages over in one section, and that counter on the left-hand side is where a matronly old lady sells lemon drops and gumballs to adoring children.  Not shown in the picture is an actual bar you can sit at, where you can order and enjoy sodas or ice cream for those nostalgic souls amongst us.  On the right is a picture from my seat of the outside, showcasing Middletown, OH.  Doesn’t it look like a generic painting?  I’m not familiar with this town whatsoever, but apparently their once bustling downtown district has been reduced to boarded-up businesses and trash trading transsexual prostitutes.  It’s all good in the hood, my friends – it most certainly is. 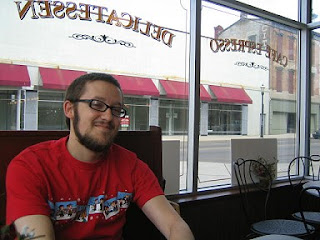 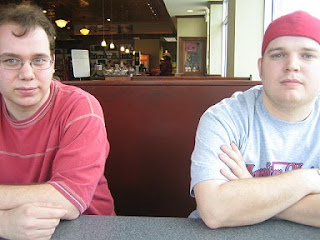 There I am grinning for the camera like there’s no tomorrow.  Yes, I fully realize I’m wearing a red t-shirt that depicts the storyline from A Charlie Brown Christmas in sequential pictures in the warm Spring – that’s part of my alleged charm.  Say hello to some other RTW celebrities – on the left is Adam from the wrestling section, and on the right, feast your eyes upon Nick from RtW TV and of the Freestyle Walking Club.  We don’t even know what the fuck sundries are – how’s that for rebelliousness? 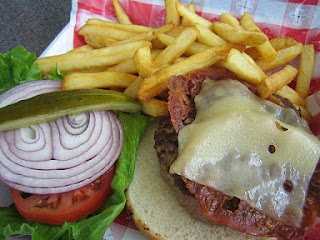 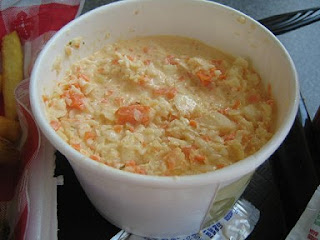 I got the bacon cheeseburger with Swiss cheese and all the fixings, some Coca-Cola with fresh lemon, and a unique variation of coleslaw that was more akin to minced fingernails seasoned with onions and carrots.  The burger was good – it helped, of course, that I was completely starving when I devoured it.  The bacon wasn’t in strips, as expected, but instead one large piece that resembled a chunk of Freddy Kruger’s back after spending too much time tanning.  The fixings were fresh and nice accompaniments.  The fries weren’t anything to rave about, although slightly above average if forced in comparison, and complimented the sandwich equaling a nice well-rounded lunch.  The coleslaw was a completely different beast, one in which I can’t find the courage to suitably summarize at this moment in my life. 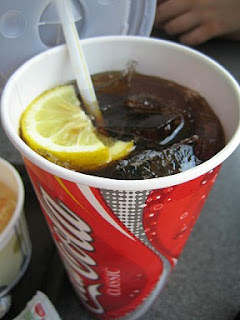 In closing, this is a neat little forgotten restaurant, that I fear may close its doors, not altogether unlike many girls did in my face back in high school.  The food was fine, although a bit pricey, but the atmosphere (eating amongst irritable men looking for laxatives and children hunting jellybeans) and ambiance inside more than made up for that.

Overall Grade: B+
Posted by Brian at 4:26 PM No comments: 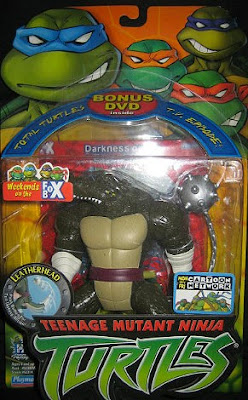 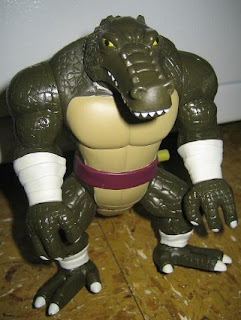 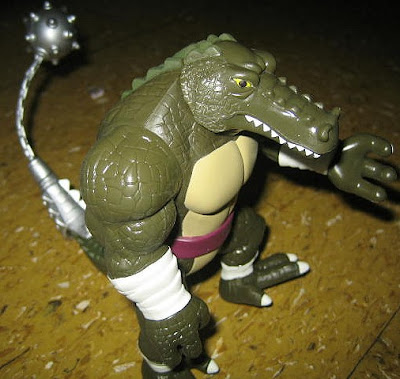 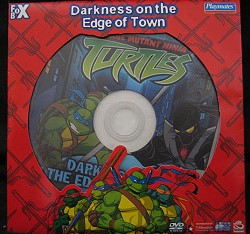 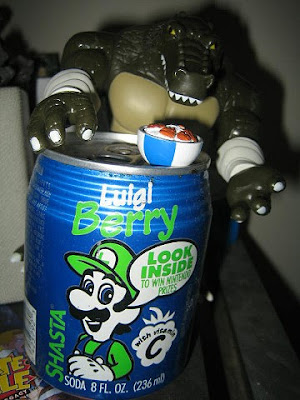 Overall Grade: A-
Posted by Brian at 4:25 PM No comments: