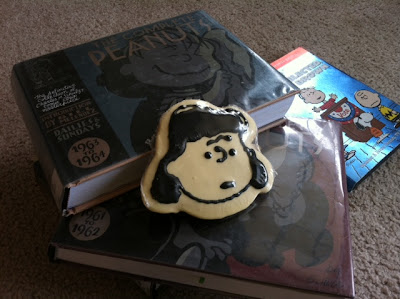 I've grown into being a huge Peanuts fan.  Back in high school I randomly picked up the Peanuts holiday specials box-set on DVD.  I didn't have a major connection to them growing up and pretty much bought it as an impulse purchase.  What an excellent decision it was.  Ever since they've become integral parts of my Halloween, Thanksgiving, and Christmas.  I watch them yearly and hold them up there alongside some of my most beloved cartoons and films. Less than a year ago someone mentioned The Complete Peanuts anthologies collecting the original Peanuts comic strips from 1950-2000 (they're releasing two volumes per year and are currently up to the late-'80's) and I realized quickly how foolish I had been not to seek them out sooner and immediately set to the library to put them all on hold and ravenously read them.  I'm still working through them but it's been an amazing journey and has led me to the opinion Charles "Sparky" Schulz is one of the greatest of all American writers.  My Peanuts love even leads me to lurking almost daily the live webcams at Redwood Empire Ice Arena (AKA Snoopy's Home Ice) an awesome ice arena Schulz had built in 1969 among the towering redwoods in his adopted home of Santa Rosa.  I saw a bonus feature on the He's Your Dog, Charlie Brown DVD that spotlighted the arena and planted the seed for an eventual visit for me as I fell in love with the place in a way I can't quite articulate nor fully comprehend. 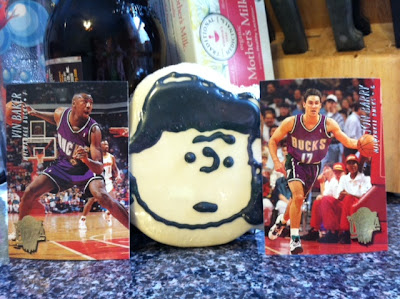 The story behind this cookie itself is also worth telling.  I was in a Hallmark store at a mall and while I usually eye stuff there I'd like to write about it's usually way out of my price range so I just window shop unless it's the holidays and I'm buying an ornament or something.  As I was looking at a birthday card featuring an orangutang in a tutu I noticed behind the racking a lone cookie lying on the floor amid the mothballs and dust.  I retrieved it, promptly paid for it, and left as if I was fleeing the scene of a crime (like when Booker T robbed all of those Wendy's' restaurants).  Research shows this was from the 2011 Christmas season and that fact will not deter me from reviewing this odd edible.  I placed it next to trading cards of Vin Baker and Jon Barry of the '94-'95 Milwaukee Bucks for to give you an ideal of scale and size. 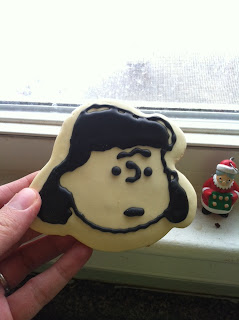 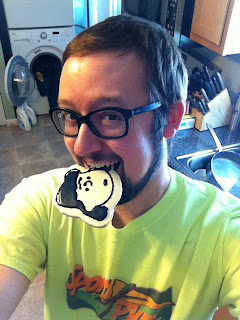 I decided I wanted to document in some way the fact I did try to eat this and also log courtroom worthy evidence I'm perhaps not entirely mentally stable.  This picture was like killing two birds with one stone in that case. 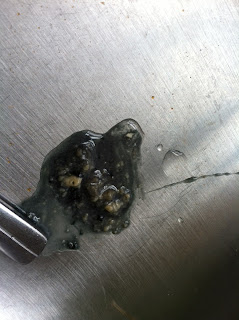 Sorry for the unsavory photo everyone.  That's what I spit into the sink after my one and only bite.  Maybe this should have been a video review (I tend to think everything should be a video -- writing takes far longer and do people even still read in this futuristic time we find ourselves living in?) so you could have seen the entering and exiting of Lucy into my mouth (that sounded more risque than intended).  The flavor was like a wax from a melted candle covering an old Nilla wafer.  Also of note was how damn hard it was to actually break with my teeth and then there's the black icing that turned my mouth two shades darker than Don Cheadle's taint at midnight in a pitch black Louisiana bayou where he happened to fall into a mineshaft into a waiting casket that's door slammed shut.  Yes, it was that dark. 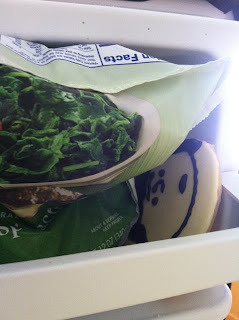 Lucy, into the far recesses of my freezer you go, next to the leafy spinach.