Many months back I raided a local dollar store to build a stash of munchies for my eating pleasure.  It was a successful trek, but long since, the food has been eaten and largely forgotten.  They had a special where you could get three candy bars for $1.00, and if I remember correctly I ended up walking, no actually I was running, out of there, with around 15 candy bars.  Originally I was going to review them all, pitting candy bar against candy bar, in a tournament of tastes the likes of which our existence has never seen.  Sadly, that never happened; but, last night, while looking through my ridiculously large collection of digital pictures, I stumbled across some photos I’d taken to accompany that aforementioned piece.  It’s snowing like crazy, I’m supposed to be at work, I figure… why not, let’s review some lousy candy!

These beasts reared their delectable head and made their emergence on the candy aisle scene well over a year ago.  The packaging is admittedly pretty well done; it’s bright, eye-catching, and only marginally exploitative.  Destined to catch the eye of passerby, especially young children, these bars, featuring either peanut butter or crispy M&M minis, were flying off the shelves faster than copies of Mutant League Football for the Sega Genesis in ’93.

Here’s our bar, featuring M&M characters posing and poising in provocative and thought inspiring positions.  These aren’t as big as most candy bars, but they’re certainly tasty.  For me, the biggest draw isn’t the miniature candies inside the chocolate, but the chocolate itself.  It’s a delicious milk chocolate that’s comparable to most others I’ve tasted.

Not as pretty from the back—looking slightly like a sculpted turd with M&M’s inside it.  Although not bad, it’ll never compare or be able to compete with actual M&M’s or other popular candy bars, and I think it’ll always be kind of jealous of them; kind of like Reed Richards is whenever Sub-Mariner gets around Invisible Woman.

Nestlé’s Toll House is prepared to enter the candy domain, with their bold entry, the soft and chewy cookie candy bars.  While the packaging is promising us a cornucopia of chocolate, the skeptic in all of us is wondering, are these any good? 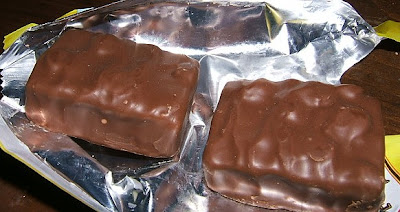 Although they make look positively inconspicuous, once you bite into one of these morsels be prepared for a mouthful of flavor.  In fact, I feel that therein lies their biggest flaws—there’s too much going on here!  Imagine mowing the lawn, adjusting your finances, and swapping The Fat Boys mp3s all simultaneously.  You’ve got chocolate, chocolate chips, caramel, and cookie competing for your palate’s primary attention.  Although not a bad idea, flawed execution leave me to believe these won’t be around too much longer.

Hershey’s has always been one of America’s foremost leaders in chocolate awesomeness, in many splendid forms.  Although the packaging pegs Cookies ‘n’ Mint as limited edition, from my recollection these have been available for those willing to seek them out, for easily years now.

Here’s our candy bar, looking a little dated, as is evident by the odd discoloration seen on the left side.  Still, I found it as irresistible as trying to beat my brother’s high score on The Adventures of Bayou Billy, and immediately attacked it with uncanny fervor. 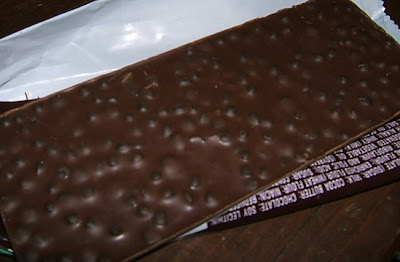 The back looks less appetizing, appearing oddly similar to the dimpled ass of Mark Henry; just don’t ask how I know that.  Still, this is a mighty fine candy bar, that is if like me, you enjoy the combination of mint and chocolate.  The cookies are a nice addition, too.  My favorite way to eat this particular candy bar is to take a bite, let the chocolate slowly melt in your mouth, then chew up the crunchy cookie bits.

In conclusion, for a $1.00 my findings were beyond sufficient.  If you find similar deals, don’t be afraid to try them out, and it’s always most fun to try at least one candy bar that’s foreign to you.  They say variety is the spice of life, I can’t concur, as I was always led to believe Mark Henry’s dimpled ass was—to each their own.

Email ThisBlogThis!Share to TwitterShare to FacebookShare to Pinterest
Labels: candy