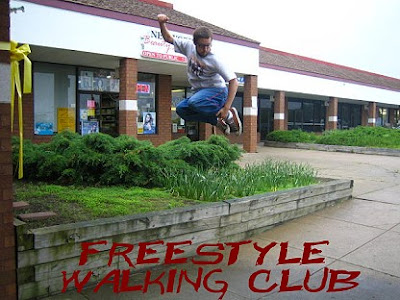 FSW Club Video #20 - "The history of the world is lost in silence." (Length - 3:11) - December 10, 2006
We know, we know, it’s been awhile!  Well, after two months of inactivity, we’re back with another delicious video for your visual receptors to indulge in.  This video’s also noteworthy as it’s the first one shot almost exclusively at night.  There’s a nice collection of sick air, tricks, and stalls – so, what are you waiting for?  Watch it multiple times for recommended enjoyment.

FSW Club Video #19 - "What do we do?" (Length - 2:57) - September 24 2006
Brian and Nick were enjoying a nice, relaxing, peaceful nature walk – of course, inspiration struck, and an impromptu freestyle walking session was thus born.  Feast your eyes on gnarly tricks amongst the wilderness, in this short, albeit satisfying sample of tasty footage.  Also, Brian’s rocking an old school flannel, which should up the awesomeness quota a couple notches.

FSW Club Video #18 - "I remember how hard it was growing up among people and places I loved." (Length - 6:25) - September 15 2006
This video depicts an intense downtown session that’s gritty, dirty, bloody, and ultimately, one of our craziest yet.  Witness our first-ever rooftop gaps, terrorizing government property including construction equipment and the county jail, a tantalizing touch of parkour, flesh wounds for orange soda, and wicked air.

FSW Club Video #17 - "A group of people who miss the same imaginary place." (Length - 9:11) - August 24, 2006
This video is absolutely awesome and essential for three reasons: 1) It features the sickest wipeout in our club’s history 2) It’s our first video that ever utilizes footage shot from two simultaneously shooting cameramen 3) We briefly introduce elements of parkour for the first time.  We think you’ll dig it.

FSW Club Video #16 - "Did you know there's a guy living in our closet?" (Length - 9:15) - August 4 and August 8, 2006
In our longest video ever, we step up our game yet again, evolving the sport of Freestyle Walking, as we’re so totally prone to do.  Containing footage from several sessions, including stuff shot at a parking lot, schoolyard, cemetary, playground, and other locales.  This session was so severe, in fact, that local police actually showed up during the process of filming and tried to prematurely end it themselves.

FSW Club Video #15 - "There's only one instant, and it's right now. And it's eternity" (Length - 6:36) - July 28, 2006
While it’s arguable if it’s our best session to date, there’s definitely no denying that it’s our most ballsy!  We ventured to our old high school (which we hadn’t seen in over 5 years) and Main St. (a section of our hometown we’d never walked prior) and tore up terrain with one of the most intense freestyle walking sessions to date.

FSW Club Video #14 - Free Apple Pie (Length - 4:03) - July 23, 2006
This was sort of an impromptu practice session in downtown Hamilton, OH.  It’s also significant in that it’s the first video that doesn’t feature mainstay Nick; however, it does feature relative newcomer Jessie, as well as the debuting Steve whom is a longtime member but new to our website audience.  There are some tasty tricks, spills, doubles, and comedy in this one.  We recommend you watch it minus pants.

FSW Club Video #13 - "Strange Things Are Afoot at the Circle-K" (Length - 6:26) - July 19, 2006
Our latest video, shot at a multitude of vicinities including parks and urban wastelands, is undoubtedly one of the best yet.  Albeit battling blazing temperatures and temperamental police, we persevered – delivering a fast-paced highlight reel of awesome freestyle walking footage.  We urge you to indulge!

FSW Club Video #12 - "Relax... It's Just AIDS" (Length - 2:37) - July 5, 2006
This is a shorter video featuring walking mainstays Brian and Nick, as well as the returning member Manda and the debuting Jesse.  There’s some sick doubles, gaps, outrageous air, innovation, and pure craziness on display; essentially the freestyle walking equivalent of a Human Torch/Invisible Woman sex tape – which is to say its extremely hot.

FSW Club Video #11 - Too Much Sex, Not Enough Love (Length - 5:28) - June 14, 2006
This video is sincerely one of our best ever, featuring quality footage from a couple sessions in a town totally foreign to us named Waynesville, Ohio, that is apparently the “Antique Capital of the Midwest” or some such tomfoolery.  We invaded their modest downtown area, and tore up terrain at nearby Caesar Creek State Park.  Keep an eye out for some of the most explosive clips ever, including Brian getting air off of a business’ roof while they were open, getting tricky in a lake in our underwear, and more.

FSW Club Video #10 - Walk Or Die (Length - 5:41) - June 7, 2006
We’re starting a new trend of titling our videos to give them individual personas – our first video got dubbed “Walk Or Die” after a motto we’ve recently incorporated into our club’s vocabulary.  This video features some awesome freestyle walking at a baseball diamond, playground, upscale shopping plaza, and more.  So, kick back and indulge in the highest quality freestyle walking footage on the planet!

FSW Club Video #9 (Length - 6:35) - May 24, 2006
This is definitely our greenest video yet – and by that, I mean there’s tons of outdoors footage!  We take freestyle walking to new levels in the middle of a forest, a park, a BMX track, hell, we even jump out of a couple of trees!  This is a fun video, the first that truly captures the spirit of summer; a great glimpse of what the following months has to offer.

FSW Club Video #8 (Length - 3:01) - May 31, 2006
This mini-move features footage shot on a sweltering hot day in sunny Hamilton, OH; as well as some bonus footage, captured on two separates dates by members Manda and Brian in Cincinnati and Oxford, OH.  There are a lot of highlights, including lots of insane air at a baseball park and some playground pandemonium.

FSW Club Video #7 (Length - 6:27) - May 17, 2006
This video features intensive freestyle walking sessions in Sharonville and Evendale, Ohio.  It was a beautiful day and we captured some of our best footage thus far at a park, construction site, indoor fun center, abandon government property, cemetery, and more.  Please feel free to watch this video repeatedly to entirely soak in the awesomeness therein.

FSW Club Video #6 (Length - 6:43) - May 10, 2006
It was a rainy day but that didn’t stop us from filming our most entertaining video yet.  Featuring freestyle walking and a lot of other randomness, this is assuredly our most unconventional video thus far.  We shot footage at a dollar store, grocery and mall in Forest Park; then tore it up at a park in Fairfield in the rain.

FSW Club Video #5 (Length - 6:22) - May 3, 2006
This six-minute video is full of highlights from our strongest session yet, mostly filmed in beautiful Loveland, OH.  In terms of the quality of the freestyle walking itself, this is definitely our best showcase yet – featuring a lot of innovative stuff including some brand-new moves, incredible doubles action, private property trespassing, and much more.

FSW Club Video #4 (Length - 3:41) - April 26, 2006
This is by far the craziest video yet – featuring some intense freestyle walking in a toy store, video arcade, and shopping mall!  We were just looking to get into trouble on this day, in what ultimately is our most fun video thus far.  We had various security personal and employees after us during the filming of several scenes, but that didn’t dissuade us from doing what we do best – walking.

FSW Club Video #3 (Length - 2:47) - April 20, 2006
This video is the definition of a downtown inner-city freestyle walking sessions.  It’s gritty, industrial, crumbling, chaotic, caustic, dirty, and fiercer than that case of crabs you got from that prostitute outside of Pittsburgh.  This is the blueprint for taking freestyle walking anywhere and everywhere – don’t be afraid to broaden your horizons.  We went to the nastiest parts of Hamilton, OH and walked the hell out of them – bravo us.

FSW Club Video #2 (Length - 6:00) - April 29, 2006
This video is packed with all kinds of highlights, wipeouts, and random awesomeness.  It also features the debut of the first female freestyle walker to ever join our illustrious club.  We step up our game have a couple amazing sessions at a local elementary school, shopping mall, and park.  This is our longest video yet – editing it was a lot of fun, and we all had a blast participating in its creation.  If you dig freestyle walking, you’ll definitely dig this video.

FSW Club Video #1 (Length - 4:05) - April 19, 2006
We wanted to do an ode to our hometown of Hamilton, Ohio for the first-ever video.  Members Nick and Brian tear up terrain in a major way in this awesome video.  We stumbled upon an abandoned hospital, got in trouble in a department store, and Brian even was bored enough to grab some clips on campus.

FSW Club Preview Movie (Length - 2:00) - March 29 and April 12, 2006
This video was a preview we put up while were working on building the actual website that now exists.  For about a month, this was a sample taste for fans compiled from footage of two sessions.  There’s stuff from several different cities and environments on here; ranging from parks to sporting goods stores, and much more. This is a great glimpse of what to expect from future videos.

FSW Club - Old School #1 - (Length - 9:54) - October 23, 2002
This is a first in a series of "old school" FSW Club videos from seven years ago (and beyond!).  Unlike videos #1 - #20 I didn't include edited in music over these older highlights, leaving the original, unedited audio intact to better preserve the heritage of the original Freestyle Walking Club.