A Day at a Flea Market

Yesterday I went to Traders World flea market with Amanda, a place neither of us go to frequently, but we both recall with a hint of nostalgia from childhood.  As a kid, I'd root for comic books or NBA trading cards, and now as an adult not much has changed as I spent the majority of my time rooting through bins of loose G.I. Joe and Teenage Mutant Ninja Turtle figures. 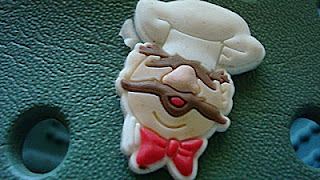 The latest trend is charms for your shoes, specifically Crocs, and while I'm not fashionable or hip, unless late-night Ice Hockey indulgences on the NES are in-style, I couldn't resist a couple of these.  There's thousands of varieties, mostly generic but harmless, and then there's some right down my alley, like the Swedish Chef charm above.  One of our favorite attractions at Walt Disney World is Jim Henson's Muppet*Vision 3D at Disney Hollywood Studios, every trip down, we make an effort to check it out a couple times.  Also, we're currently in the midst of watching the first season of The Muppet Show on DVD.  Personally, outside of mainstays like Rowlf the Dog and Fozzie Bear, I tend to dig the more obscure characters, like the gigantic Sweetums, the crotchety critics Statler and Waldorf, and stern taskmaster Sam the Eagle.  Swedish Chef is always a riot, though, from his outrageous cooking seminars like making doughnuts using a shotgun, to his one-of-a-kind speech that's often emulated and never unfunny. 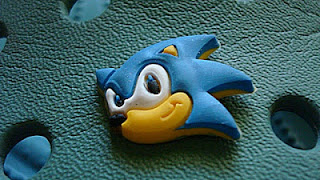 Sonic the Hedgehog was my second choice, especially since the vendor claimed they were completely out of Super Mario.  My affinity for the little blue guy has grown in recent years, stirred up by Saturday mornings watching Sonic X, fueled by Sonic's comic books' rich continuity and history, and my recent procurement of the entire Sonic Underground animated series on DVD. 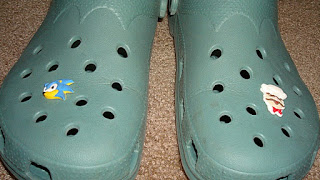 For the unaware, this is what the charms look like on shoes, shown above in my Sage-colored Crocs.  Crocs, while goofy in general appearance and somewhat of a trend themselves, I've found to be ideal shoes for me, especially during these warm summer months.  I've worn mine at theme parks, on long outdoors walks, to work, etc. 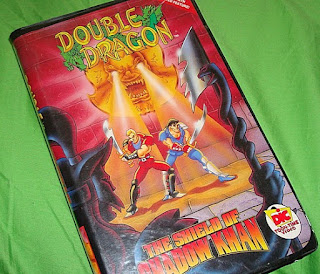 Now we're talking!  Double Dragon is one of my all-time favorite video games.  The animated series, while certainly not as beloved, still holds a place in my heart.  I scored the above VHS for a measly $1.  While doing research I discovered one curious customer review on a major retailer website, the enthused review said, "This is a really great movie. No question,you gotta have this movie. Try to rent this cool vedio. I gave it 5 stars! If you hate this movie,you`ll pay!"  We'll pay?  What kind of threat is that!  Seriously?  Expect a full review on this gem in the future. 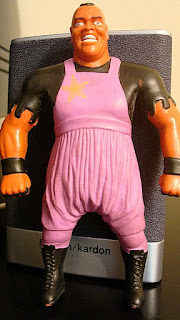 Last but certainly not least, my greatest (and most expensive find at $3) is this bendable King Mabel figure!  Mabel is from a dark period in WWE wrestling lore where all of the characters were monstrous stereotypes, i.e. garbage men, race car drivers, voodoo shaman, etc.  Mabel was one-half of a team called Men On a Mission (or M.O.M.) that were also billed as rappers living a hip-hop lifestyle. 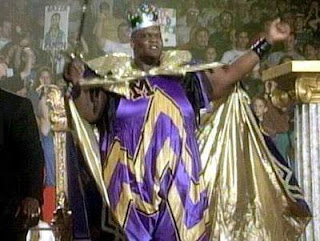 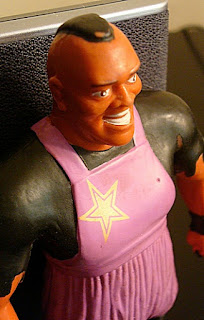 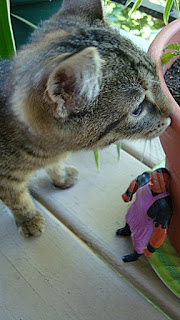 Alright, yes sir!  So, what else?  I'm sorry Mabel, but the real reason I got you was because you were the most ludicrous wrestling figure in all of the giant bins... and trust me, there were some pretty heinous ones in there!  Your purple suspenders speak to me in a way I can't quite articulate I must admit.  Your mohawk looks a bit chopped up in the front, perhaps a visit to the local barber shop is in order?  Even my kitten Tomo wanted to get acquainted with the newest member of our household. 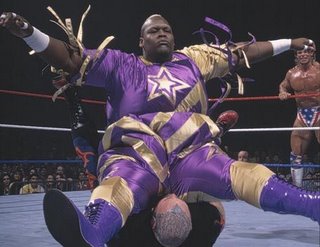 King Mabel:  I'll jump on your face!  Don't disrespect me, son, you got it?  Take me back to the flea market, the girl hocking the denim jackets was about to slip me those digits, boy.  Word!
Posted by Brian at 9:25 AM