There's a few reasons why I decided upon this place to write about and little of it had to do with the food. As usual I was following my own nostalgic impulses. Years ago, maybe a decade or so back, in the same building Cancun now occupies there was this terrific Mexican buffet which I was just bonkers over. The building itself is sort of nestled into the back of a dead-end street practically underneath a freeway. Back then I'd felt like I had made a major discovery. Before the Mexican buffet I believe it had been a Chinese buffet, and likely several other things before that, it sort of has the feel of an old Perkins. But back to this Mexican buffet -- it was glorious! Have you ever even heard of such a thing? I certainly hadn't before or since. You'd trot over to the buffet islands and fill your plate with as many enchiladas, tacos, chile rellanos, and tamales as you could handle! Unfortunately nothing gold can stay and it disappeared quietly into the night not unlike Pancho Villa after a robbery.

Fast-forward to now where a Mexican restaurant, albeit not a buffet, is holding residence in the building, I found myself dying to get back inside for the first time in years to see what of the old magic held up and if it'd still be recognizable from my fond foggy memories. Also, last weekend while giving out of state visitor Molly of Swagger Mom Tales a tour of the area while inside the mall we passed a deadbolt clad, shuttered and boarded, Margaritas which I reviewed back in 2005. Seeing the darkened desolate version of the restaurant I once was serenaded in and made jokes about pissing on its floor birthed a desire to do a new restaurant review. Coupled with my curiosity these things led me to Cancun Mexican Bar & Grill. 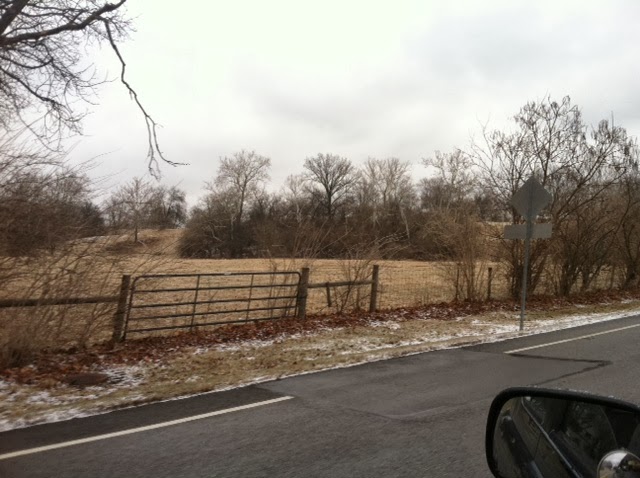 Winter Storm Titan was underway but an unexpected break in the snow and freezing rain gave me an opportunity to make a run to Cancun. Here's a picture of some scenic farmland -- I wonder how the taquitos crop is coming in this year? 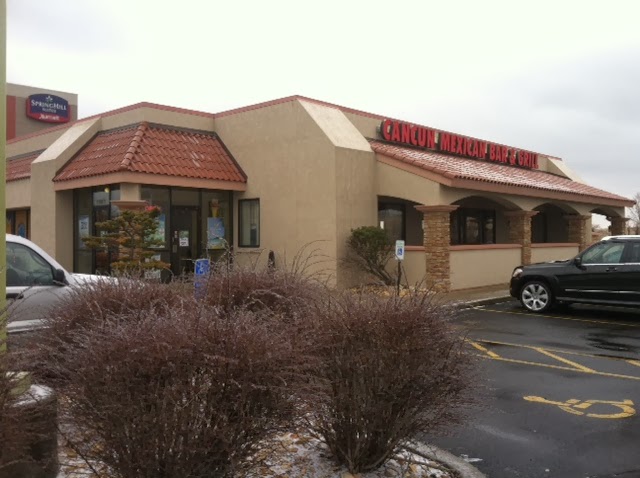 There she is! It's hard to see but the bushes in the lower-left corner had a complete layer of frost over them. I must admit I was feeling pretty good and excited at this point. A moment of jubilation hit me as I drove over a nearby bridge en route. Life can beat us down with its routines day-to-day so little moments like a trip out for a special meal can be meaningful. I hadn't opened that door in roughly a decade and had all sorts of warm memories of the past flooding in. 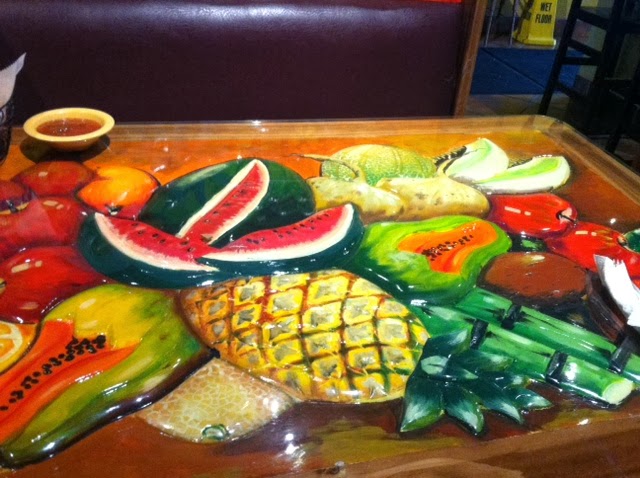 As I entered it took a moment for my eyes to adjust. The far side of the restaurant was lined with windows (an image of that near the end of this review) letting in bright light so I blinked beleaguered into shadow. After standing for a moment taking in my surroundings a very short man in a black zip-up hoodie got up from the circular bar area which holds center court in the restaurant (where I believe the bulk of the buffet islands previously were) and came over to me. I suspected it might be Pequeño Nitro sans mask. He led me to one of the first aisles of booths and to my spot for that day's meal. I know they lump people together during slower times so the waitstaff doesn't have to cover as much ground but I'd have preferred not being bunched with the other few groups there at the time since I was traveling solo and the other empty side of the restaurant held more visual appeal. I was greeted by this amazing tabletop however. Take a look! Using an unusual embossed technique the art really pops and the vibrant colors struck me like a ray of sunshine to a bed of marigolds. 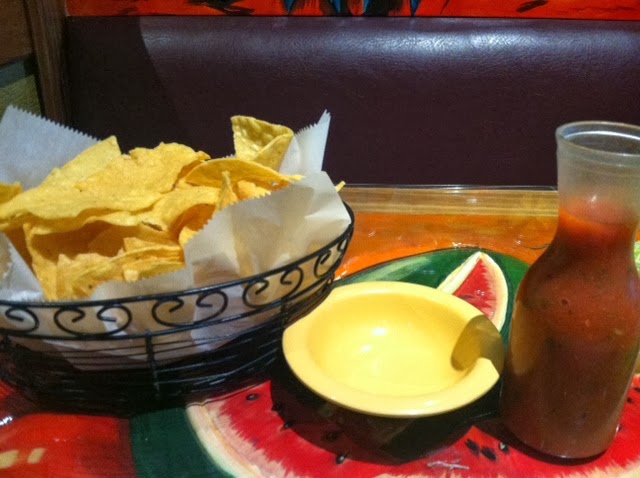 Shortly after being seated I was brought out some chips and salsa. I'd forgotten about this crucial part of any self-respecting Mexican meal! But needless to say I was thrilled at its arrival. 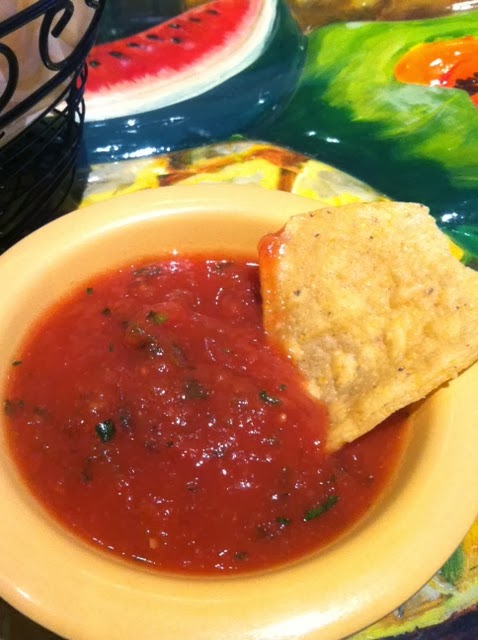 And boy was this an excellent riff on chips and salsa. Every restaurant uses the same basic concept but will do something a little differently, maybe a little extra cilantro, perhaps spicier, or more thick, etc. Their salsa had an amazing consistency and I'm not sure what method they used to get to that endpoint but it was flavorful and tasty and not too thin or runny nor thick or chunky. Well done. The chips were warm and that's a big deal! It's funny what a difference that makes but a warm basket of chips is infinitely more inviting than a sad cold one. I felt like I ate more than my fill and yet shockingly when I left while the salsa container was nearing empty the chips look relatively untouched so you certainly get a lot and it's refillable should your party devour them all. 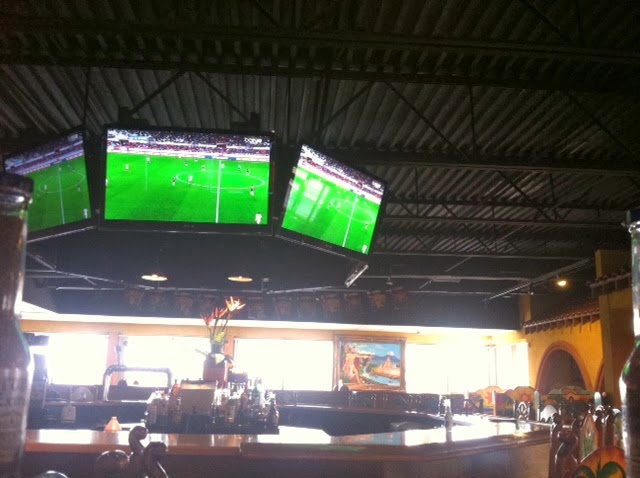 Here's the bar area taken slyly by holding my phone up above a barrier. One lone silent man sat nursing a drink and shot me a glance that I read as, "What you know about Xochiquetzal, esé?". 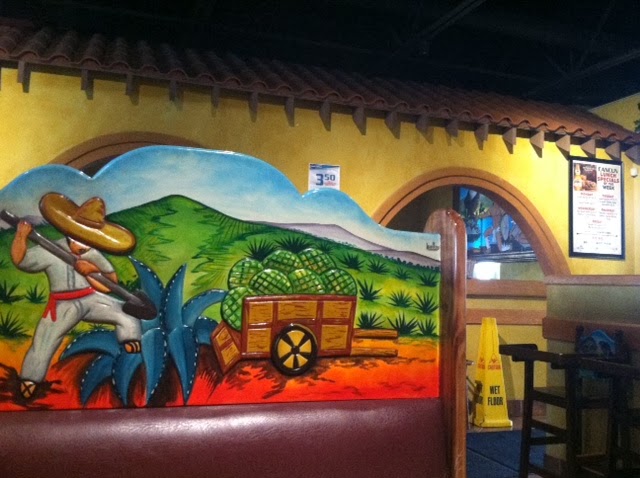 Some nice scenery inside I must add. In the background an adobe style roof adds charm but I want to talk about the backrest of the seat you see there. To quell my boredom I concocted a story behind it. See what's really happening is that field worker is feeding a giant blue underground monster that's sprouting up through the scorched earth. He's unloading his supply of watermelons directly into its fierce gullet. 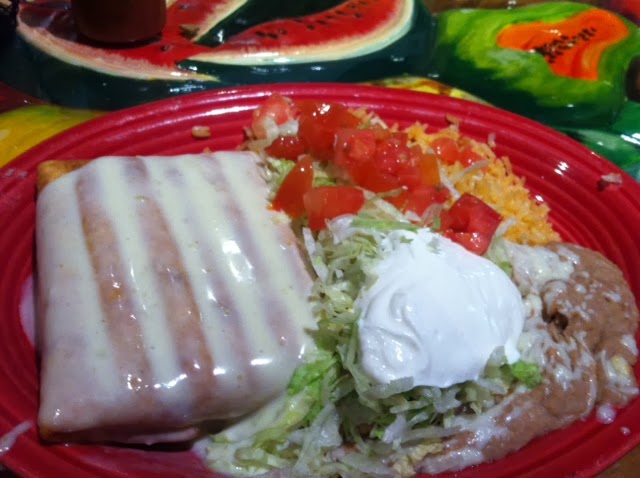 So I wanted to order from the lunch specials to gauge the food quality. I'd given the menu a cursory glance online but wanted to wait until I arrived to make a final decision. I'd considered doing one of those combo multi-item deals were you get a to try a couple things and maybe a side dish but then my eyes scanned over chimichanga and my heart skipped a beat. I don't really have any past history with the dish. I'm familiar enough with it and undoubtedly I've eaten one before but that being the case it was so far back that I can't really recollect the experience. In that moment it beckoned out to me and I was not prepared to turn a blind eye to its plea. 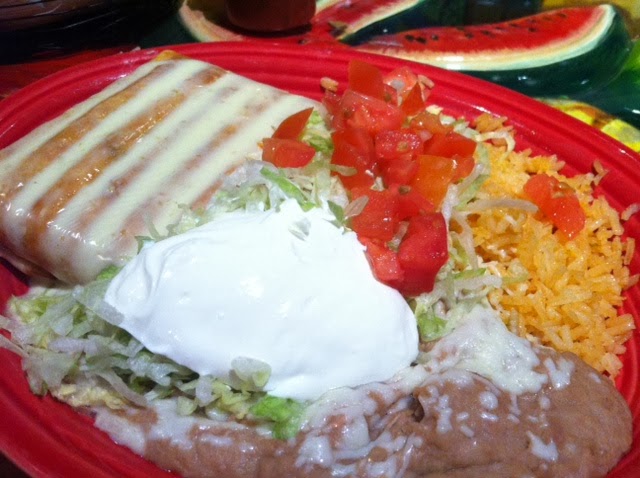 Another vantage point where you see a clearer view of the accompanying sides.  So I get this rather large deep fried beef (chicken was also an option) chimichanga covered in cheese sauce, rice, beans, and sour cream on a bed of shredded lettuce and diced tomatoes. 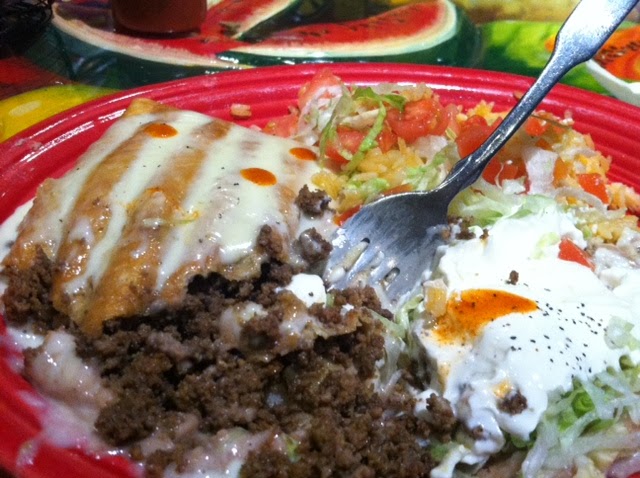 Wow. This was banging! Right away a euphoric feeling rose over me. Within the first bite or two. Before I break down the food itself I want to talk value. $5.75. That's it. My entire meal. My entree, chips and salsa, and a water. That's not bad at all. In fact it's downright impressive. A lot of fast food joints have been steadily upping their prices, so nowadays, a chicken sandwich combo meal at Wendy's is going to set you back nearly $8 and trust me it'll never be as satisfying as the meal I had before me and nobody needs that jumbo soda with the inflated price anyhow. I don't know that I'd call myself particularly thrifty because I like to treat myself to things like meals out routinely but I did grow up relatively poor and as such appreciate the value of a fine meal at an affordable price. I'm often racked with guilt after blowing cash at fast food spots but was beaming with a big smile throughout while eating knowing I'd paid a fair price for a really enjoyable meal. 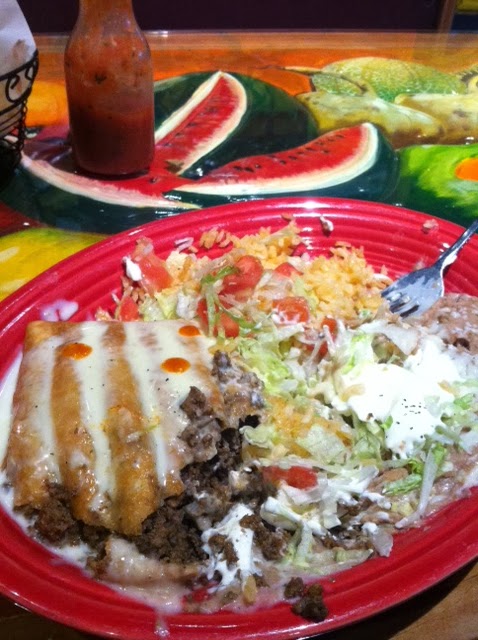 Let's talk about the food! As soon as I placed my fork against the chimichanga cheese sauce oozed up over the sides akin to trying to submerge a toy boat in water. For me on most foods a little cheese can go a long way but this was very delicate and smooth and not at all strong or overwhelming. It added some moisture and texture that really added to the dish. The seasoned beef inside was incredible. How come whenever we try to make it home it's either way too seasoned and instant heartburn or to curb that it's not seasoned enough and just tastes like regular beef? They had a perfect blend with an almost peppery flavor that worked great paired with some of the more mellower side dishes. It's been said the true mark of a Mexican restaurant is their rice and beans and both were uniformly solid. The beans were very smooth with no signs of crust from being overcooked or sitting too long which can often be the case. I love mixing the sour cream and vegetables together to make a salad which goes splendidly with the more rich chimichanga creating a nice balance and keeping the dish from being one-note. The food was really great and now I know a return visit is due soon hopefully with my wife and kids so we can all feast. And you better believe I'll be getting a chimichanga again! 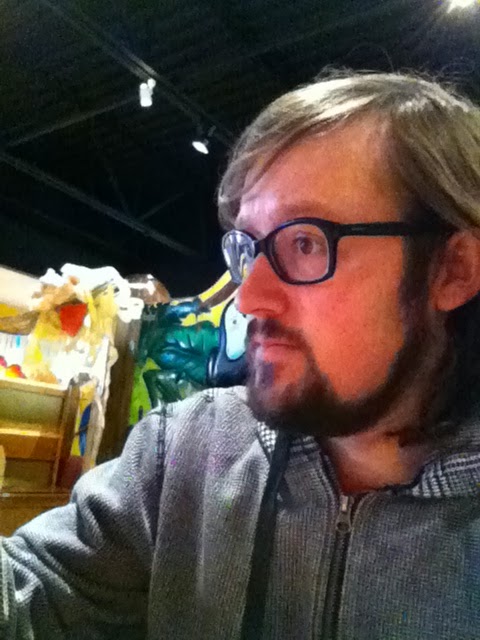 I recalled almost too late that in the early RtW days I always included a picture of myself when doing dining reviews. I'm not sure what I was doing/thinking here but perhaps I was lost in thought. Grappling with the subtle inquiries into the human condition from Critters 3. Have you ever hit that point toward the end of a meal where it feels like to take any more bites is some sort of cruel unusual prison punishment? I hit that wall. But over time I've learned to look past that initial discomfort in recognition, as if a meal's made me that full and I'm still trying to polish it off it must have been awfully damn good. 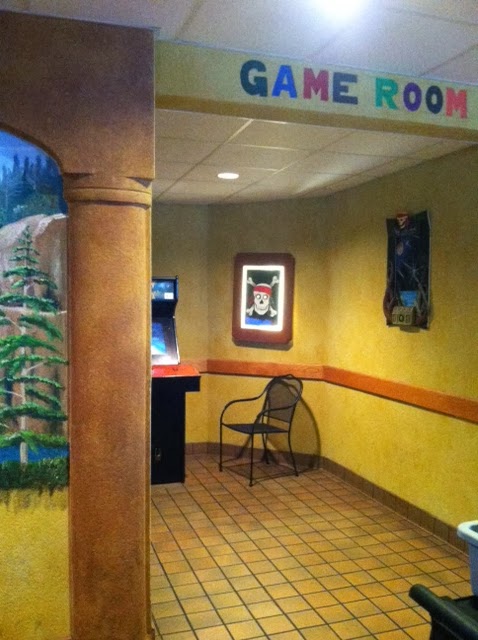 Before leaving I wanted to look around some but little remnants of the past remained. But before I called it a day I saw some brightly colored letters that appeared to be dabbed on with a bingo dauber. Wait. What did it crudely say? GAME ROOM. I wasted no time bustling past the Deuce Mob and into his glorious gallery of gaming. 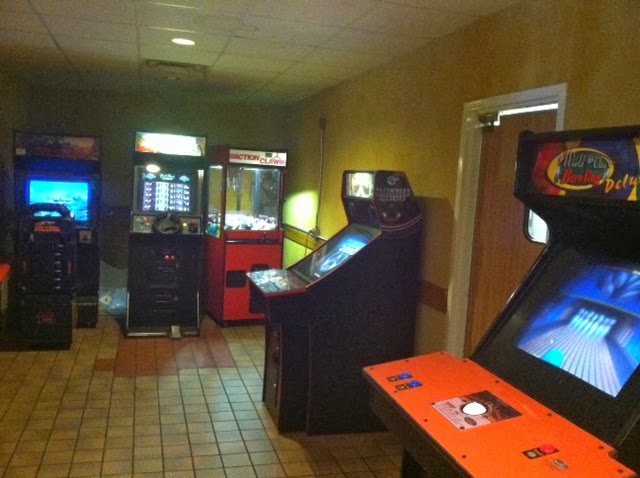 Ugh. Dark, dimly lit, and desolate. I immediately thought of my friend Matt's old article from '04 titled The Worst Game Room Ever!. Similarly to Matt I oddly anthropomorphize inanimate objects regularly and thought briefly if these machines could talk of their pasts, their hopes for the future, their desire to be caressed and endlessly, ceaselessly played. Maybe it's like Toy Story and if they aren't being used by humans they slowly lose their life. There was a bowling game, Beach Head 2000, and a paltry racing game that made me long for Off Road. 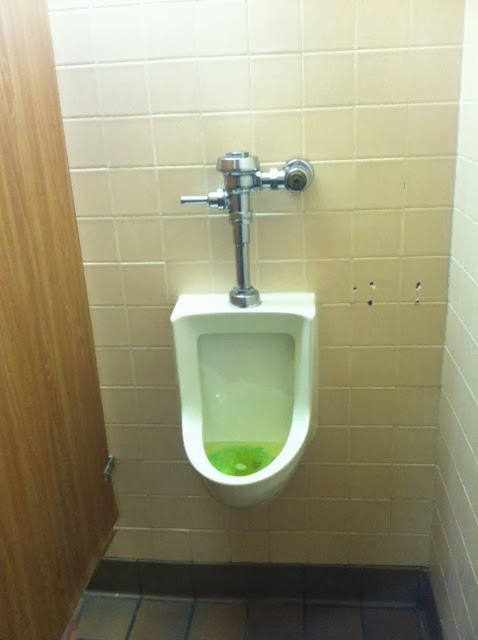 The restroom felt like one of the puzzle chambers from Cube 2: Hypercube. 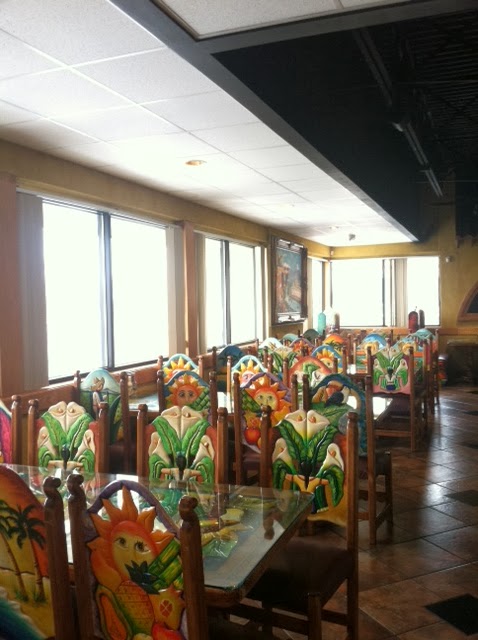 Here's the aforementioned far side of the restaurant with the better lighting/view. Next time I want to get over there. The easy way or the hard way. Overall I had an excellent time. I urge readers, and I'll take my own advice here, to break the routine sometime from eating at the same places all the time out of convenience or habit, and seek out new and different spots to try. It'll be a rewarding and enriching experience. I left very full and happy and at only the cost of $5.75 and the 8 seconds of my life I won't get back from taking a blurry picture of a urinal.