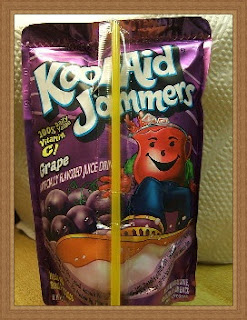 In a world as jaded and tough as our own, it’s nice to know that there’s still something out there like this.  Anyone who was ever a child undoubtedly spent some time having his or her mom whip up a nice cold batch of Kool-Aid some sunny summer afternoon.  These days the kids can skip that step entirely, moving right on to the good part… drinking the crap!  Kool-Aid Jammers makes theories of relativity look asinine and novel; I mean who cares about all of the grappling issues with society and our existence when the liquid equivalent of gold lays one squeeze away?

First off and foremost, let’s talk about the amazing packaging.  Iconoclastic spokesperson for the sugary substance has always and will forever be the colossal known as Kool-Aid Man.  Isn’t he just the coolest?  Here’s a classic example of how this character can pull just about anything off.  Wearing a hideous green windbreaker Kool-Aid Man snowboards across lavender drifts of snow emphatically driving us wild.  I have no idea who in the hell his travel agent is, but I want to know where these mountains of purple snow exist, and how much a roundtrip ticket is to get there?  Wow!  In the background we get a glimpse of luscious grapes right from grandma’s backyard orchid, each with their individual drops of water that somehow subliminally mean something to the common consumer.

100% of your daily value of vitamin C is included in each and every pouch, which is saying quite a lot considering the youth of today’s eating habits and consequently what type of things are geared at them.  Now, let’s briefly touch on the taste itself.  When it comes to the original Kool-Aid concocting process, people universally use varying degrees of sugar to their individual liking.  Here, Kool-Aid gives us the perfect blend the definitive version of their “Grape” flavor, as made by the company itself and proudly wearing the official logo.  The first drink is worth the price of admission alone.  I don’t know if grapes as a fruit have ever been more faithfully represented as a pouch of concentrated liquid, and that’s really saying something, I think.  Although Kool-Aid will always be best when created in the kitchen the old fashioned way, complete with mock mad scientist evil laugh, this is certainly not a bad substitute for those on the go or just lacking ambition.  There’s a lot of different brands of artificially flavored juice drinks out there, but if you’re only going to pick one, pick Kool-Aid if for nothing else sentimentality.