Some of My Favorite Plush Toys

The idea for this article has been germinating for years until just recently I began building it like the Doozers constructing scaffolding throughout Fraggle Rock. I moved out of my parents’ for the first time in 2005 and since then have resided at various addresses from sundry apartment complexes to palatial suites and maybe even a flat above a duo Chinese takeout restaurant/laundromat. In white trash bags I’ve lugged dozens of stuffed animals and misc. plush dolls of a myriad sort. Most of these are from my youth or my teenage “collector” years where I actually had the disposable income to buy Super Mario stuff off eBay.

Like most boys of the ’80’s my real toy fascination sprung from that decade’s glorious array of action figures. From G.I. Joe, to Battle Beasts and Army Ants, even Food Fighters, a ragtag gang of anthropomorphic food adorned in military attire. I couldn’t have been the only boy who penned an ode to Burgerdier General, right? But I amassed an intriguing assortment of plush toys over the years as well. Many found a home in a net crudely hung like a hammock in the corner of my bedroom with various sports balls and a cylindrical poster container I’d often wear over my arm and pretend was a missile launcher or laser canon. Now they’ll finally see the light of day and get the reappraisal and appreciation they’ve richly deserved all these years. I have enough plush toys to do several installments so perhaps one day you’ll get the pleasure of meeting some more of my soft pals but for now meet the gang! 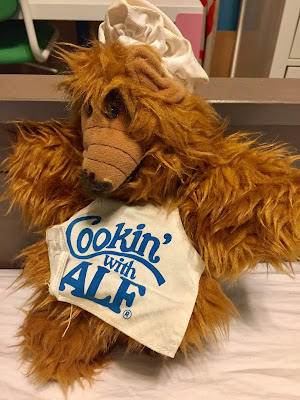 Back in 1988 everyone’s favorite cat-munching, wisecracking alien ALF invaded Burger King (here’s video evidence). You’d receive ALF in one of four themed outfits. Pictured here was the “Cookin’ With Alf” version (sans the pot of chili or feline stew or whatever the hell he was making). There was also “Beach Party” with Hawaiian shirt and surfboard, “Melmac Rock” with electric guitar, and “Take Me, Alf To the Ballgame” with a jersey and ball glove. My appreciation for ALF didn’t really blossom until much later in the mid-2000’s when I revisited it on DVD and totally fell in love with the show. It’s one of a small handful that really hold up in terms of entertainment value outside of nostalgia itself. I’d always wondered why he had a brown mustache and just solved that mystery for myself. He doesn’t rock facial hair in the other 3 versions nor on the show so I guess the designers just found it appropriately chef-like. I’ll have to pop my head back in the kitchen next time I’m at Red Lobster and see if the guy prepping the salads has a Rollie Fingers-like mustache. 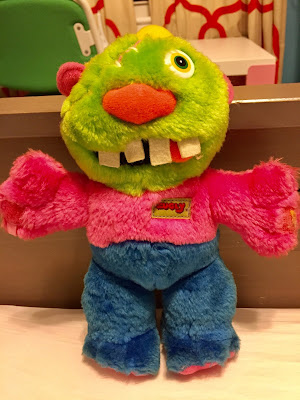 Introducing Zugly! I don’t have a lot of vivid or specific memories attached to this one but he was around my room rubbing shoulders with Fozzy Bear and the like. Some quick research shows a lot of people received these as gifts around ’85-’87 and in reading forums many have held onto them all these years and have now passed them on to their own children! Monsters and other grotesqueries were all the rage in the 1980’s. There was My Pet Monster and Madballs, of course, and as this video shows Zugly wanted in on that action. Seeing my Zugly in his original packaging via a Google search calls to mind he’d previously been ensconced in a hot pink chain with lock and key I suppose to suppress him were he to give into his more savage tendencies or try to run off with your half-full pack of Watermelon Bonkers. 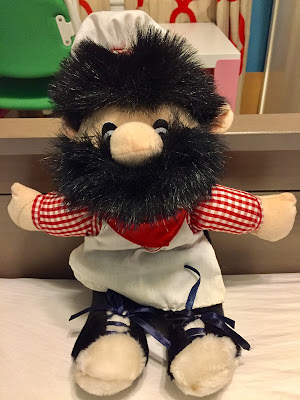 Pasqually E. Pieplate from Chuck E. Cheese’s! So right out the gate in my eyes and heart Chuck E. Cheese’s is an American institution. It deserves its own article in tribute or even more. But today I’m focusing on Pasqually. And I’ve got to tell you: going down the rabbit hole was deep and wondrous. A few searches later and I was inundated in Pasqually history, images of various animatronic iterations, and hours of crudely shot and uploaded video. Somewhere around the age of 19-21 I somewhat unironically held a birthday party at Chuck E. Cheese’s for the first time in roughly 15 years. A group of a half-dozen friends joined me for pizza and arcade games and frankly it was freaking awesome. All you can eat salad bar, Cherry Coke, and Skee-ball beats out just about any other birthday combo. It was at this ersatz birthday shindig I plucked down my two bits and bought myself a Pasqually. It’s one of those love affairs and purchases that you can’t qualify or explain. I felt drawn to this ridiculous character, surely a legitimately offensive Italian stereotype, resplendent with bushy black mustache, handkerchief, and apron. Pasqually’s Tinder profile states that he’s also a pizza chef and an aspiring comedian but we all know him as the drummer for Munch’s Make Believe Band whom you’d better rush out and see in-person soon as rumors are the restaurant and fun zone may be retiring the animatronic characters permanently. For those needing a little more Pieplate fix I’ve got your video hook-up! Here’s a disturbing mustache fail, a pizza-making instructional, a Christmas tune about Sasquatch, and even Pasqually doing the Nae Nae. Now that’s a spicy meatball! 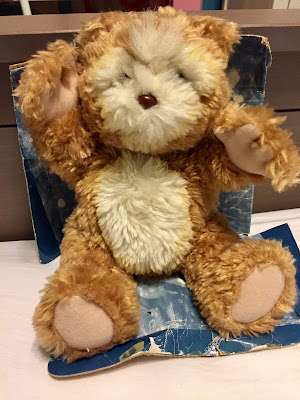 This next one I’ve cherished for years as a particularly unique item. Back in June of 2001 the film A.I. Artificial Intelligence hit theaters nationwide. Directed by Steven Spielberg it was famously a Stanely Kubrick project until he fell ill and handed it off in 1995. For a film to have toys released in the likeliness of its character is all too common and in fact toys of that ilk overrun the toy aisles at Target and elsewhere nowadays. But A.I. wasn’t your average, everyday family film. Coming in at a whopping 146 minutes this PG-13 sci-fi drama told the tale of a robotic boy named David longing to become “real” to regain the love of his human mother. It’s an often emotionally harrowing film dealing with complex themes like death and abandonment. So to have Teddy, David’s android teddy bear, still in (what’s left of its) original packaging is pretty cool and remarkable that it was made in the first place. Certainly this item wasn’t flying off store shelves and racks at KB Toys but likely found a home at specialty shops that were more collector-driven like Media Play or Suncoast Motion Picture Company inside malls. Somewhere I (hopefully still) have a smaller, keychain version of Teddy too! 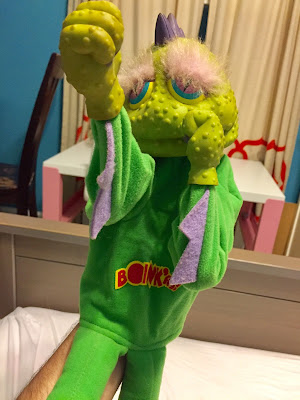 Boink’rs! The name of a monstrous band of boxing buddies or the fraternity your nephew is presently pledging. This one is showing the ravages of time as its faded, dirty, but still in the fight. Doing some research these slugfest puppets came boxed with a “bop bag” one of those inflatable deals that you could hit, kick, and karate chop and it’d bounce right back for more. Growing up a fan of professional wrestling I’d often upgrade my offense to suplexes and slams until I eventually busted it. Advertised as “The Wacky Punchin’ Action Toy That Never Gets Out Of Hand!” it was surely utilized by big brothers and sisters to terrorize their smaller siblings. Looking, for the very first time, nearly 30 years later, at some of the other Boink’rs battlers I think we got the best one as the yellow, pink, and purple varieties, each sporting a unique sculpt and design, aren’t as appealing to me, although the light blue one does have four eyeballs. Would you rather go 12 rounds with Mike Tyson or break bread with the Boink’rs boxers?
Posted by Brian at 11:41 AM