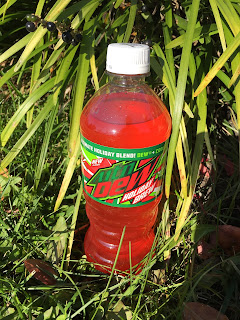 I first came across this merry and mirthful beverage just yesterday while taking my daughter to get some Pokémon cards. I scanned the label with a speed not unlike Yuga Khan and was disappointed to see it wasn’t an entirely new recipe but instead a hybrid of two preexisting Dew flavors. I was hoping for a tart berry or splash of cinnamon. I’d dreamt of Linda Cardellini but woke up to Linda McMahon.

Now this isn’t the first time I’ve tackled seasonal beverages on RtW. In fact they’ve become all the rage in recent years. Going way back I’ve investigated the mysterious Fred Claus Icee and would be remiss not to tip my hat to Pomegranate 7 Up. Labeled as the “Ultimate Holiday Blend” the Holiday Brew is a combo of Mountain Dew & Mountain Dew: Code Red. Code Red premiered in 2001 to acclaim infusing Dew with a “rush of cherry flavor”. It’s still around today and is as common in rec centers as false bravado. 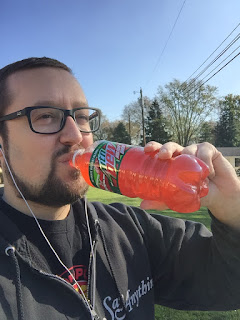 You gals and guys want to know how is tastes so let me don my Clark Kent investigative apparel and report the facts. I like it. I definitely found it more palatable and pleasurable than I’d expected. Sure, I would have loved a new holiday flavor, one that we’d look back on in tearful remembrance in a decade, but this not only tastes pretty good but also somehow captures a Christmas-y zest. It’s bright and bubbly. In the last year or so I’ve switched to diet sodas (Mellow Yellow Zero is solid if you’re into citrus pops) when I do imbibe in sugary or faux-sugary drinks but I drank this guilt free. 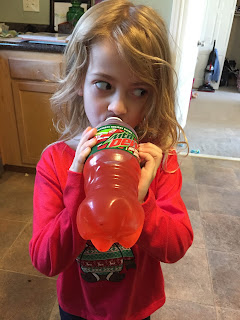 I even gave Yukari a sip. She doesn’t drink soda normally but was curious and feeling the giving holiday spirit I couldn’t resist. It’s not a drink to chug while washing down your sandwich or after a jog, it’s designed and done best when sipping sporadically, preferably within eyeshot of old-fashioned blinking Christmas lights, a model train, or while cruising in a warm car admiring people’s holiday lights and yard decorations. 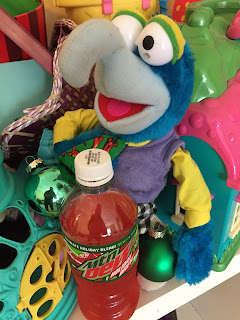 This is a welcome edition to the blossoming 2017 holiday junk food scene and gives hope that Pepsi Co. will continue experimenting with holiday-specific beverages in the future. Grab a couple soon and open one up next time you pop in Christmas Evil on Blu-ray and kick up your pajama-ensconced legs.
Posted by Brian at 11:48 AM