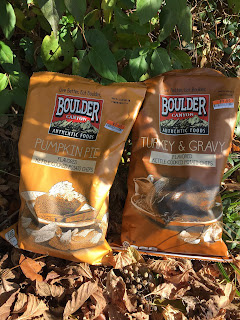 You knew your boy Brian wasn’t going to let the 2017 Holiday Season go by without reviewing these Thanksgiving-themed chips. Right, dawg? Oh, wait — people aren’t saying dawg anymore in 2017? Noted. Moving on: did he say Thanksgiving chips? Yes! Break out your best pilgrims and indians attire, break bread, cornbread ‘natch, and gather ‘round to hear tale of 2017’s most radical holiday-themed edibles. No, I’m not talking about Uncle Frank’s eggnog-flavored weed brownies either. 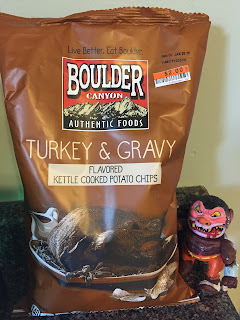 Coming up first is the main event. Thanksgiving’s signature dish. If this were Survivor Series this would be The Ultimate Warriors vs. The Heenan Family. In a beautiful brown bag bare witness to a succulent bird on a platter next to a gravy boat. Yes a gravy boat. I love it that that’s an actual thing. Where were your parents when they purchased their first gravy boat? Was it an unseasonably warm day? Were they shopping at JCPenney? 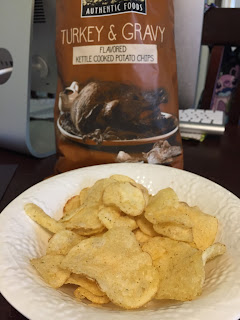 Behold the chips the fine folks at Boulder Canyon Authentic Foods bestowed upon us. This is the type of amazing that’ll make listening to relatives’ uncouth political punditry less punishing. 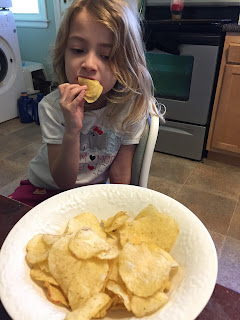 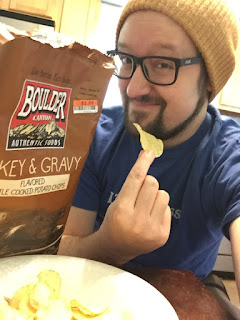 Joined by my brave daughter Yukari we both dug right in. No forks and sadly no stuffing or cranberry sauce within reach but what we discovered was tastier than we could have hoped for.

The verdict is in and these are astoundingly good. Like positively the best Thanksgiving-flavored foodstuff in recorded history. You can get the turkey seasoning upfront but it’s the gravy chaser that’s all the rage. I can say they somewhat resemble Lay’s Southern Biscuits & Gravy chips (which I also like) but are their own, unique thing. In terms of chip quality they’re fresh and crunchy, too. Just an all-around awesome snack that kept getting better the more we ate. 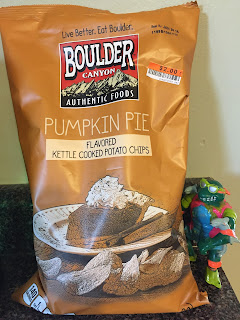 Then it was time for dessert and you know, love it or loathe it, Thanksgiving ain’t going to pass by without you seeing at least a dozen pumpkin pies in your vicinity. A nice light brown bag rocks a dish not dissimilar from grandma’s serving plates topped with a generous slice of pumpkin pie complete with a dollop of whipped cream. 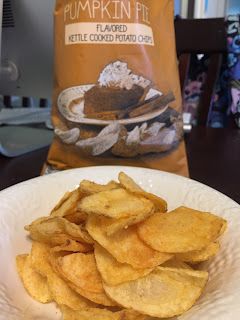 These chips were a lot more colorful with an orangish shade that called to mind fall leaves and autumnal feels. 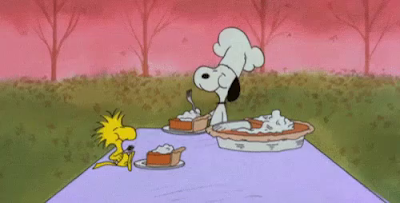 Wow! These things are insanely flavorful. Like they skipped right over subtle and used a sledgehammer. I can imagine the factory smelled like a nutmeg candle as they pumped these out. I’m someone who likes pumpkin pie just fine with copious amounts of whipped cream atop it so if you’re also not completely enthralled with pumpkin pie I’d say worry not. While sweet these chips aren’t overly strong in the pumpkin flavoring although it’s definitely there and there’s just a little bit of that salty chip aftertaste to cut through a bit of the sweeter notes. These were also wonderful but something I’d need to eat in small quantities. 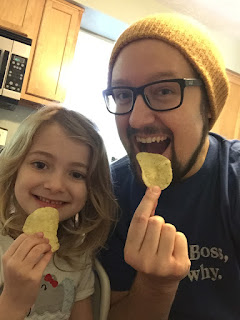 After much deliberation we decided we needed to select one winner to carry on the candied yam crown. And we certainly didn’t mind another round of tastings as these chips are glorious.

We both picked Turkey & Gravy! Great minds think alike. I can’t gush over these enough. And trust me, if you bump into me at the store or library, I’m going to break out dogeared crinkled photos of these like they’re photos of grandchildren and pridefully show them to you. Halloween was stellar this year, and Christmas holds much promise and joy, but Thanksgiving won the holiday war this year with these delicious delights.

Happy Thanksgiving everybody! Hope it’s a wonderful day. I’m thankful for all of you and your support and friendship. Here’s some older RtW Thanksgiving fun: Thanksgiving Gumballs, Pomegranate 7 Up, and Bacon Soda.
Posted by Brian at 11:44 AM