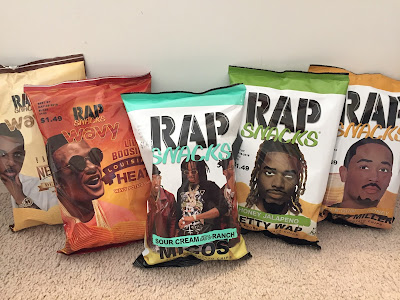 Back when Review the World launched in the cold days of January 2005 we landed what we undoubtedly knew was a goldmine for our initial article. Many pre-RtW all-night sessions were underway including late night drives and countless cups of coffee at diners. We tossed around ideas for a name for the project. “Dead Leaves” and “Misumasu” (“to observe carefully” in Japanese) were some of the aborted titles. One afternoon while in the inner-city of Cincinnati we stopped at an unusual corner store. It appeared to have a second-level beneath our feet, a basement or bunker, with its own separate side gravel and broken fence dotted entrance. We could hear wild dogs barking from below. Was it an underground dog fighting arena? Or perhaps something even more sinister? It was in this dimly-lit market we found three bags of Rap Snacks. I immediately plunked down my two bits and bought them, then ran out to the fresh air and moderate safety of a garbage strewn sidewalk. That night at Steak ’n Shake my pals and early-RtW braintrust Nick & Danny sampled the snacks with me which birthed the first-ever published RtW article.

Over the years Rap Snacks became synonymous with RtW. Almost like our mascot or spiritual totem. They’ve always been difficult to procure so only briefly appeared in a few tiny cameos in videos we produced but they’ve never been given a proper reappraisal … until now. These erstwhile urban edibles are as big a part of RtW lore as any item. If there were an RtW Brian piñata and you bludgeoned my papier-mâché body not candy but stale Honeydew Cheese Curls would fall out. A big thanks goes to my friend and RtW super fan Toby for helping bring this reunion together. 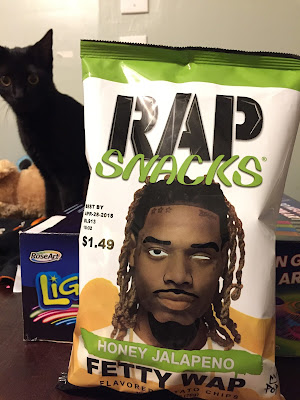 So here’s Fetty Wap resembling something between a swamp zombie and a cadaver. A very quick search leads to some fun finds like he refers to his music as “ignorant R&B” and salacious stats like he’s fathered 7 children including kids with “video vixens” and exotic dancers. His diaper tab not withstanding Fetty, which sounds like a fun salad topping, rose to prominence with his hit “Trap Queen”, with poignant lyrics like “I be in the kitchen cooking pies with my baby”. Make mine pecan or rhubarb, please. 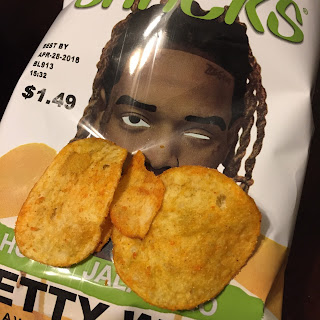 Here you can see Wap’s Honey Jalapeño chip in detail. Picturing a honey-drizzled fresh jalapeño pepper is a little disconcerting but if you don’t mind a singed asshole then you’ll be alright. 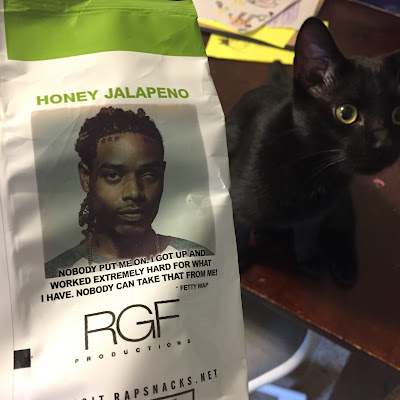 On the back of Rap Snacks bags are quotes from the presenting performer(s). Fetty’s sounds less like motivational message than alarming paranoia that someone’s out to take what he has. I think he should worry more about seeing an optician. Fetty’s chips never satisfy my barbecue or spicy hankerings making for a relatively unpleasant eating experience. The sweet and spice here don’t work complimentary and the end result is as appetizing as chewing on one of Fetty’s fetid braids. 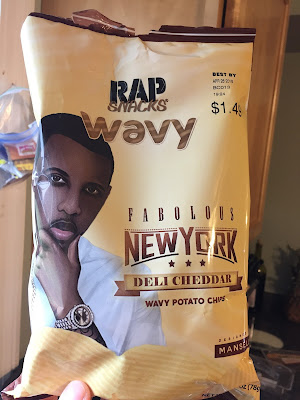 Next up is Fabolous spelled ludicrously wrong but with style. Who is this man rocking the gold wristwatch and Family Dollar white t-shirt 3-pack special? Known for more than being shot outside a restaurant in Oct. of 2006 and carrying unlicensed firearms he’s quite prolific having released 7 full-length albums in a career spanning 16 years as well as playing shockingly against type in the role of “Gunman” in Scary Movie 4. 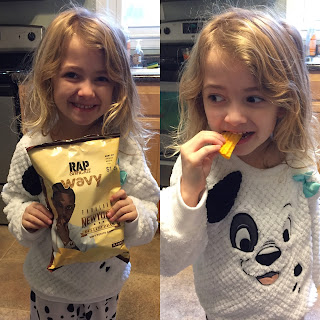 I’ve got to say I genuinely dig the New York Deli Cheddar concept. It’s got specificity and “cheddar” is a slang term for money so it also has some panache. I brought in my daughter to pass the Rap Snacks love down to the next generation. The verdict is we loved these. They're crunchy and cheesy and right away you detect there’s more going on in their flavor profile. I don’t recall all the seasonings from memory but there’s stuff like onion and garlic powder and other flavors to make these more than a simple cheddar-flavored chip. 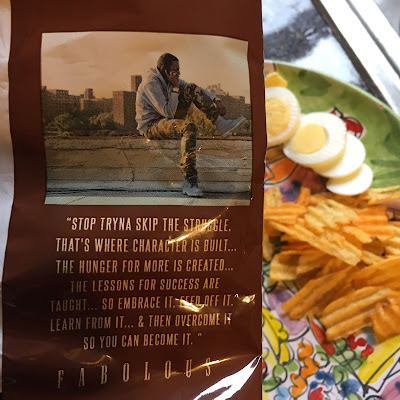 Fabolous was apparently not a fan of Warp Zones in Super Mario Bros. 3 as he speaks out against skipping the struggle and urges snackers far and wide to embrace and learn from life’s trials. 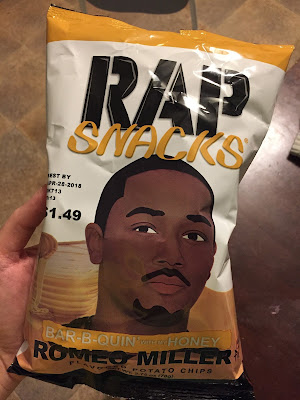 Wow. The only returning flavor from the original review 13 years ago. No longer Lil’ Romeo but now the decidedly less marketable Romeo Miller the name’s changed but the flavor remains the same. Miller has went on to perform on facile Dancing with the Stars but we’ll insist on remembering him best for his ditties like “Little Souljas Need Love Too”, where he penned the heartfelt lyrics “Little souljas need love / Little kisses and hugs / Come get wit these thugs”. 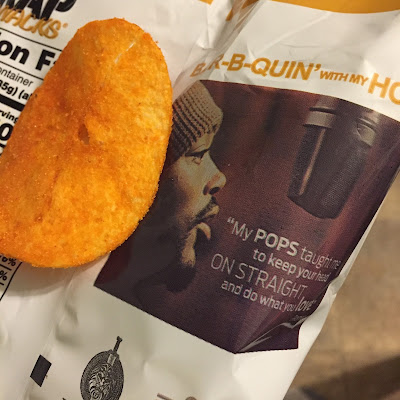 Gone is the derivative cityscape background from the older packaging as now Rap Snacks presents a more unified, streamlined, dare I say safer and boring aesthetic. These chips aren’t bad, almost too heavily coated in seasoning, it makes for a flavorful and not subtle sweet BBQ snack attack. Romeo references his father Master P in his quote cribed from the sappy side of a 1950’s milk carton. I know I always hate when I don’t keep my head on straight and it gets slightly askew. 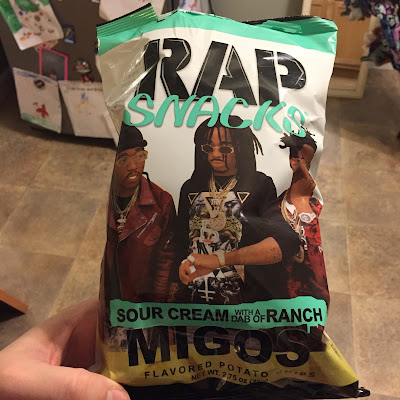 Migos presents "Sour Cream With A Dab of Ranch"

Migos is a Georgia hip hop trio comprised of Quavo, Takeoff, and Offset. Their bag is probably both the busiest and best of the bunch. Your qualms on their apparel and proclivities may vary, but with stirring Shakespearean lines like “Eat up the dab like linguini and crab” from their underrated cut “Look at My Dab” we have to defer that they are, in fact, street poets. 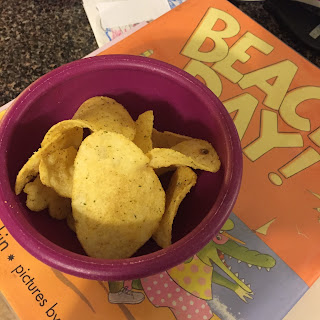 The chips don’t look dissimilar from Lay’s Sour Cream & Onion chips, a flavor nobody’s ever picked first off a store shelf, but the taste is appallingly worse. A lot of people have an aversion to white condiments, be it ranch or mayo or tartar sauce or sour cream, but I’ve never been one of them. But the flavor of these chips is what I somehow imagine those white condiment-averse folk have feared. It’s way upfront and in your face with what I can only describe as a cloying parmesan-like flavor that’s not going to work on its own or as a side dish alongside a nice lunchmeat or cucumber sandwich. These are bad and borderline insulting, like one of Migos’ lyrics that states, “They sayin’ Migos better than the Beatles”. 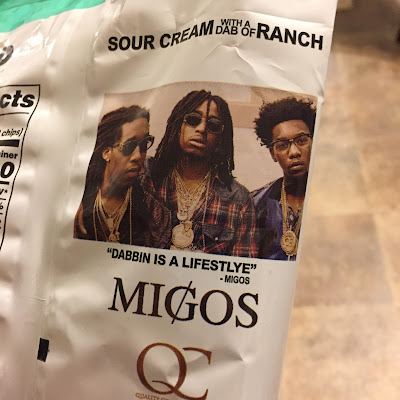 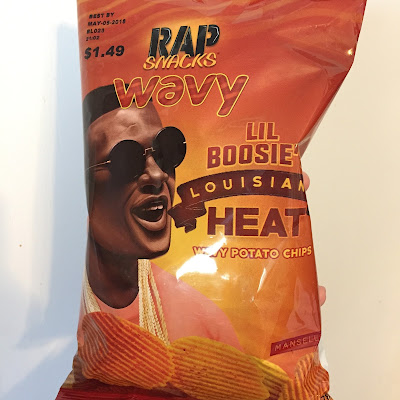 No longer Lil Boosie, but now preferring to be referred to as Boosie Badazz, this Southside Baton Rouge raised rapper spent five years behind bars in the Louisiana State Penitentiary, but that didn’t dampen his dreams and desires to have his very own potato chip flavor. In a sun-kissed bag that calls to mind the torching rays of late summers in the South, Boosie bellows in tribute to his state by concocting a chip in its name. Louisiana Heat promises to bring the fire and brimstone not unlike Kane. 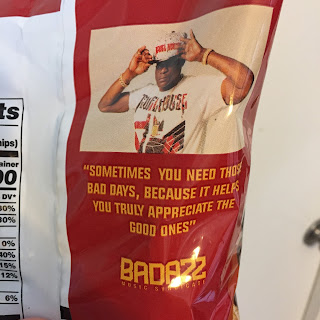 While a strange venue to pimp personal philosophy, being the back of a bag of junk food, I’ve got no qualms with the message itself as Boosie shows his zen side. 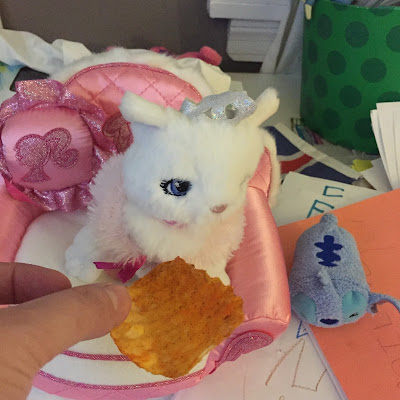 I tried to feed one of these to RtW’s on-staff stylist Princess Pussy Kat but she said it didn’t fit into her macros. It’s with a tear, no not a tattooed teardrop on my face, but an actual tear, that I regrettably inform you these are straight trash. Unlike the best of spicy foods, there’s no nuance to the heat here, it’s just baseline heat but coating a grainy chip with the flavor profile of running one’s tongue under a gym bleacher. Boosie, your intentions were well, but the results are as unwanted as another prison stint.

Rap Snacks, your Wikipedia entry has mysteriously disappeared, but you’ll always have a special place in the heart of Review the World. As we celebrate the site's birthday to my friends and fans, anyone who’s ever had fun reading an article or watching a video, thank you so much. So much has happened in my life in the 13 years of the site’s existence, but it’s always nice to know that I can hop on here and RtW’s various social media accounts and interact with such wonderful people and share a laugh or remembrance of weird sodas, dollar store bric-a-brac, and the Koopalings.
Posted by Brian at 12:10 PM