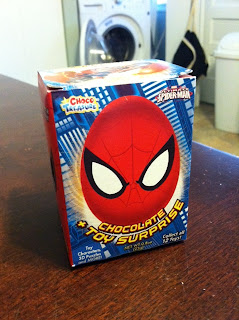 For the first new article on Review the World 2.0 we're going headhunting for a chocolate web-slinger!  In the box above lies a super heroic somebody cocooned in cacao.  Obviously the first thing I thought about was the beloved Nestlé Wonder Ball (if you're unfamiliar click here for a plethora of images via Google).  Those things were great.  Delicious milk chocolate spheres that housed inside, depending on the era, either figurines of Disney characters or SweeTarts-like candies. They were pulled off of the market due to some choking hazard issues but according to Wikipedia the company Frankford "is in the process of bringing them back". 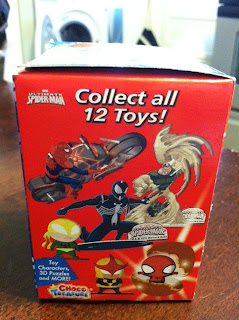 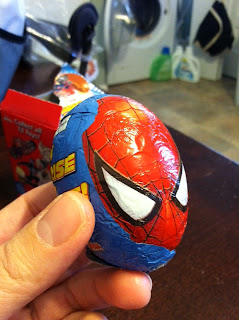 It was hard to discern if this was an officially licensed product as the artwork on the side seemed to depict several different styles the most noticeable being the relatively new Ultimate Spider-Man animated series.  For those that haven't seen it I'd give it a recommendation, doesn't take itself too seriously, and having a sense of humor and capturing the wisecracking Peter Parker we all love.  Occasionally on the show the style will briefly slip into an exaggerated manga/anime homage which births the big, bug-eyed versions of Iron Fist, Nova, and Spider-Man near the bottom of the package.  Opening the box I found my egg-shaped treat resplendent in shiny foil also calling to mind the Wonder Ball. 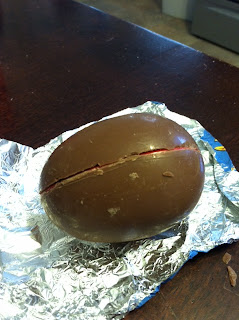 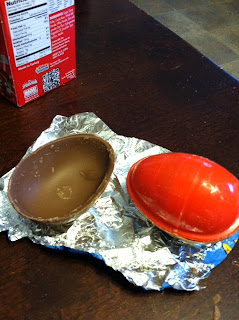 Unlike the Wonder Ball, however, which you'd break into by whichever means intrigued you most (crack it against the table, bite into it, use a chisel and pretend you're Dr. Alan Grant, etc.) this chocolate spilt into two halves more or less on its own.  The chocolate itself wasn't too impressive, the Nestlé Wonder Ball I recall being milky and wonderful, this though was kind of grainy and disappointing.  What was awaiting me inside? 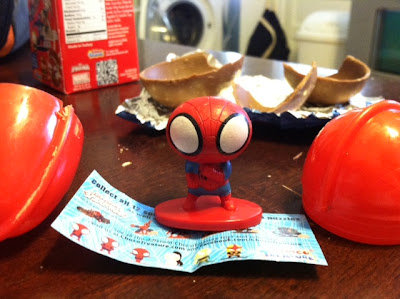 It's adorable anime-inspired Spider-Man!  He stands proud ready to web-sling right into my heart. 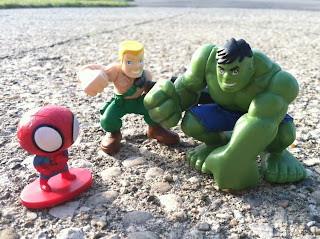 Spider-Man: Excuse me gents, know where Jacques' Chili Emporium is?  I'm supposed to be meeting my pal Sonic there for a few chili cheese dogs and to quaff some root beers --

Duke: No, of course he doesn't, Hulk.  Why would he smell like chocolate? Let's just move along, alright pal? 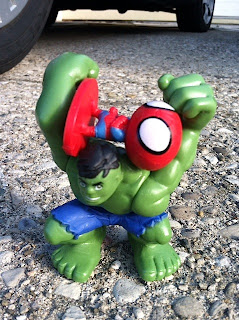