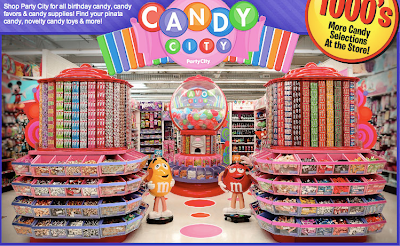 One of the things I aim to do in the next month is go in with $10 to Party City.  That's all you need to be king.  It's like going down to a Tijuana grotto with a $100.  That ten bucks will buy me more candy and party favors than I'll know what to do with.  A grown man patrolling the aisles looking for rubber insects and lollipops shaped like flower pots isn't that unusual, right?

I've got all my old articles moved over to the new blog (save for one -- it's got 70+ images so I saved it for last) and about 40% of my videos.  Should have everything in its right place within a week.  Speaking of video, been hearing some great feedback on the stuff I've shot with my new HD camcorder, still tinkering with its setting (just realized it had its image stabilizer automatically on and I did think the video looked slightly off but that's something only the most attentive viewer would notice or weirdos like me).  If you haven't watched it yet I posted Go! Road Trip #5 yesterday and it was a lot of fun to shoot.  I'll be posting another new video in 5-6 days.

Lastly, hello to all the new visitors!  Since we've moved over to the new digs and my good buddy Matt plugged us over on the Dinosaur Dracula Facebook page seen lots of new traffic.  Welcome to RtW it's sort of like an old issue of Nintendo Power crossed with a stained '87 NYC Chinese takeout menu and a pad of Jim Henson's sketches from his salad years.
Posted by Brian at 3:11 PM