(Note: This article was written for one of my old websites.  I dusted it off and thought you’d enjoy it.  It’s awfully quaint, but its heart is in the right place… kind of like Clark Kent’s.  Enjoy!) 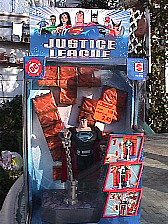 Although Justice League itself consists of some of the most kick-ass characters in all of comicdom, the toys based upon the animated series have not really interested me thus far.  For the price tag they carry, they just don’t seem to offer much.  Then, I stumbled upon this baby for a little over $2.00 on clearance.  Score!  Right? 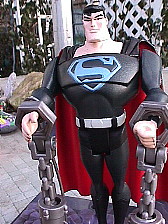 First off, here’s Kal-El (or Superman) looking insanely cool.  He’s wearing his Krypton gear here, which to any hardcore comic fan is worthy of at least two orgasms in and of itself.  Now, the gimmick behind this particular toy is that, once configured, by pressing two buttons Superman will break free of his shackles and destroy a brick wall in the process. 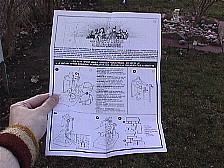 These directions might have well been printed in Krptonion, because they made absolutely no sense to a scholarly young man like myself. 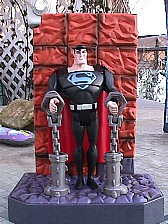 After much hard work and laboring, here’s what it looks like completely built and ready for destruction.  When it came time to finally press the buttons, and free Superman from his mystery oppressors, guess what happened?  Nothing.  With the exception of his left arm lifting up slightly, it was a joke.  After another ten minutes of battling this beast, I finally got it to work somewhat as advertised, but at this point I felt like a blast of Superman’s heat vision on my bare ass sounded like a better alternative to spend my evening. 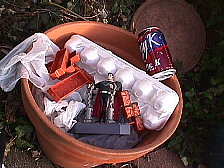 Finally, in the end, this is where it ended up, in the trash with the other garbage.  Thanks Mattel, for eternally altering my prospective on Superman and wasting thirty minutes of my life.