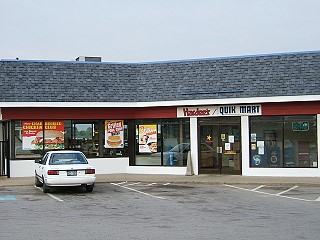 During a road trip, you’re bound to stop at several rest stops and random restaurants.  On our way to Tennessee, while making our way through Kentucky (all of the rumors are true), we decided to grab some quick grub at Hardee’s.  Now, I know what some of you might be thinking… he’s reviewing Hardee’s?  I know, it’s not an obscure diner or anything; but over the last 5 years, every Hardee’s within 100+ miles of my apartment (back in Ohio) have curiously closed their doors permanently.

I used to love their mushroom and Swiss hamburger, and often find myself dreaming about running through fields and jumping in puddles with a large representation of said sandwich.  This particular Hardee’s shared a building with a Quik Mart gas station, featuring an attendant who had a strong resemblance to Apu of The Simpsons fame. 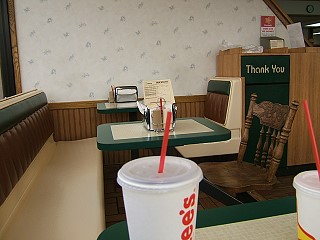 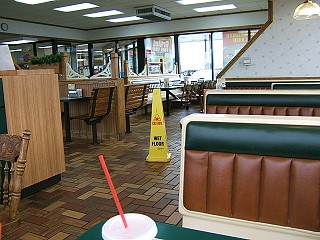 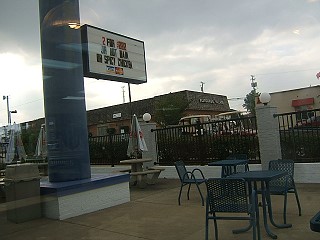 During the course of my vacation, I accidentally deleted the picture I took of their front counter.  Which especially sucks, as I had to be all stealth, and do a couple somersaults to avoid their employees’ watchful eyes while taking it.  I did, however, snap a couple shots of the interior.  In the first two pictures, you get a glimpse of the painful wallpaper, floor tiles in Tetris shapes, and lots of the color brown.  The last picture isn’t a high quality image, but I kept it because it reminded me of the area, and how it fit perfectly with Kentucky stereotypes.  Across the lot, was a Western apparel and boot shop, as well as a couple of other things that just called out “we’re hillbillies, y’all!”  Whatever that means… 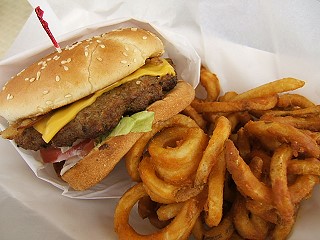 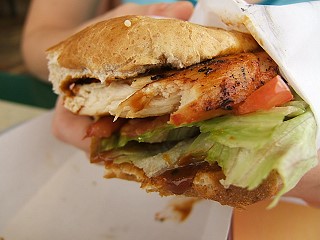 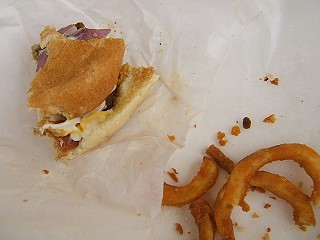 The food?  I had the Bacon Cheese Thickburger combo with Coca-Cola.  My first impression was honestly not too positive, and I don’t know how odd it is for me to say it, but my burger tasted too much like… beef.  Over the course of the meal, I became accustomed to it though, and by the end, even embraced its flavor.  It’s just a massive burger, and lest I forget, there are several other even larger burgers on their daily menu.  Once I got a littler further, and the fixings (tomato, lettuce, onions, mayonnaise, etc.) started mixing with the burger and bun, it was actually an above-average quality fast food sandwich.  I enjoyed it to the last bite, which is also pictured above in all its glory.  You can also see Amanda’s choice, some type of BBQ chicken sandwich, which she’s defined for me as “unique” and “slightly above-average”.  I tasted it, too, and found it palatable, albeit not particularly enchanting.  Damn… I sound like I actually know what I’m talking about!  Too bad I don’t put this much thought and energy into my schoolwork.  Lastly, I usually prefer traditional fries, but due to Amanda’s insistence, I opted for the crispy curl fries.  When I think of the term “crispy curl”, the mental image of the popular hairstyles of the 1987 starting line-up of the Utah Jazz comes to mind, and that’s not too appetizing.  They were kind of dry and insignificant, especially in comparison to Arby’s curly fries, but made for a passable, if not decent, compliment to my sandwich. 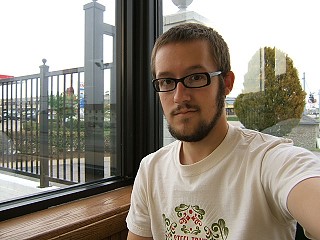 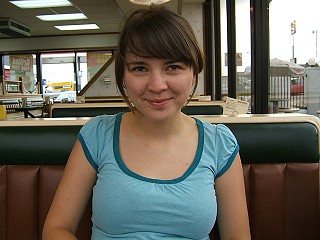 I look like I just ate something called a “Thickburger”.  Wait, I did… and, I think Amanda was smiling because we were about to get back on the road, and not because we were sitting inside a Hardee’s in the middle of Kentucky.  Aw, shucks, ma! 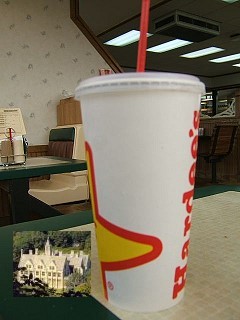 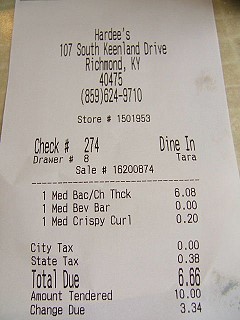 I can’t finish this review without mentioning this monstrosity of a soft drink.  It was huge!  For you Marvel Comics fans, this thing made Galactus look like Toad… can you dig it?  To give you an idea, I placed it next to a nearby mansion I temporarily borrowed, to put it in proper scale.  And you want to know the scary thing; this was the fucking medium size!

Upon closer inspection, that’s not the scary thing at all!  Oh no, not in the least!  I didn’t notice this until just now… but look at my total!  666!  The mark of the beast (and by that, I mean Satan, not Dan Severn) and all that crap.  In closing, if you’re bored this weekend and want to make some prank phone calls, there’s the number on the receipt; give them a ring, ask about the “Thickburger”, and tell them Brian sent you!