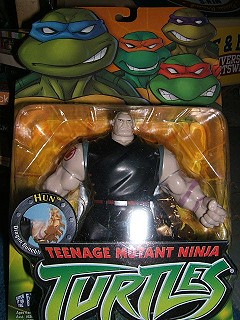 I love Teenage Mutant Ninja Turtles.  When the new cartoon series debuted I was anticipating it severely.  Not only did we get to see our old favorite characters return, but we were also introduced to a whole new batch.  One of the standouts is this character, Hun, who’s Shredder’s right-hand man.  Hun commands Shredder’s army of Foot Ninja, the “vicious ground forces” of the Foot Clan.  Shredder handpicked Hun when he was a “young street punk” running with the infamous Purple Dragon Gang.  His character on the animated series is awesome… watching him follow through Shredder’s devious plans and battling the turtles themselves in hand-to-hand combat. 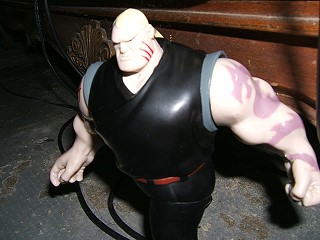 The toy?  It’s also very cool.  Hun’s hulking size is demonstrated well, as he’s just huge.  He’s got his original Purple Dragon Gang tattoo, which is a nice attention to detail.  The left arm features “Dragon Punch action” which is the popular old school gimmick where you can pull an arm back and hit a button to release it giving the illusion of the toy throwing a punch.  Hun also comes with two snap-on “Dragon Arm Gauntlets” that are great.  They look extremely cool, and are simple to put on or remove. 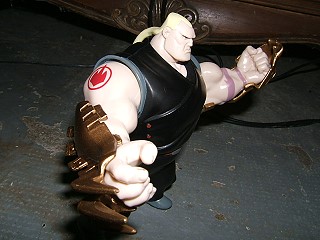 This really is a great piece, and a nice villain toy to accompany the hero turtles for battling action.  Hun’s not the most dimensional character in the series, but he’s a great brute force presence, and the toy is an excellent representation of the animated version.