It's the season premiere of the Brian and Tim Show! In our first episode of the season, the guys first take a look at Fruit Ninja, the board game companion to the popular Xbox 360 Kinect game. Then, Tim takes a visit to the Butler County Fair where he tries some fair fare, visits with some animals, and plays some carnival games.
Posted by Brian at 8:59 AM No comments:

When I worked at a game store one of my favorite pastimes (besides instigating rivalries between customers) was playing handheld games.  In fact, the Game Boy Player accessory for the GameCube is probably my favorite video game-related thing ever.  I've gotten so much use out of that thing.  So, that all in mind, I decided the other day I felt like going to a local game shop, paying my two bits, man, and bringing home some new games!  I wanted to go random, but felt putting my hand into a container full of loose cartridges blind wasn't the best idea, owing to the potential of getting doubles or games I've previously owned, so just grabbed some oddities.  Here are my findings: 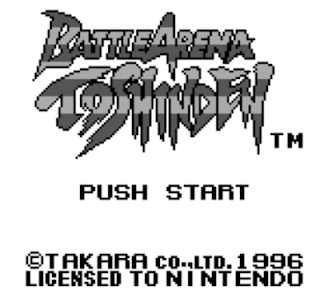 Fighting games on portable systems have always confounded me.  Especially on the Game Boy where there's only two buttons.  I remember my brother getting Mortal Kombat on the Game Boy and it being such an eyesore.  Years later I got Primal Rage for my Game Gear, it definitely was an improvement visually, yet still got tedious fairly quickly.  I'm unfamiler with the Battle Arena Toshinden mythos but am ready to scrap! 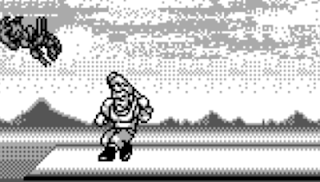 I'm a sucker for a cute, cheerful face so choose Ellis, an orphaned dancer from a traveling theater troupe seeking her father (who may or may not be dead).  Damn!  Some asshole miner named Rungo Iron smacked me into oblivion with a gigantic concrete baseball bat.  This is fun button-mashing mayhem with difficultly level settings if you want more challenging fights.  Not bad given its limitations. 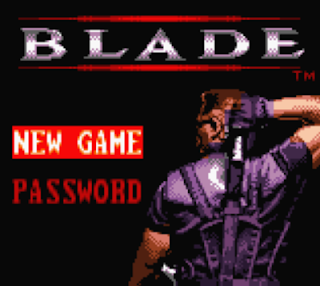 Wesley Snipes time!  Let's do some Blade stuff.  Pretty indifferent toward the comic character and wasn't too impressed by the film series.  But I'd totally be up for cutting some undead vampires up with a sword or something. 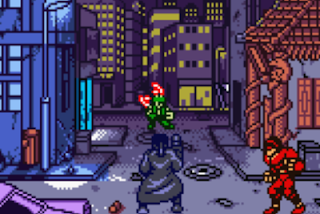 Oh, what the hell is this?  It's like a shooting game from behind the character similar to Cabal.  The targeting and control is awful.  This is a nightmare. 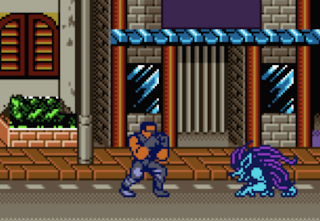 Now this is more like it!  I was about to toss the game into my aquarium as new decor for the fishes but then I found out each stage has different gameplay.  This, Chinatown, is a side-scrolling beat 'em up which is more my speed.  Not cool that it takes like, a dozen or more attacks and far too much time to eliminate one baddie, but still fun.  Graphics and colors are quite solid on all the various stages. 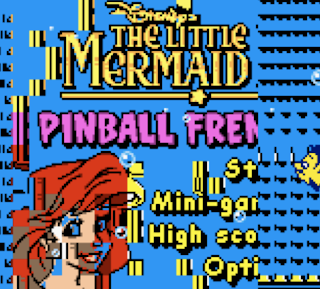 So, back when working the game store one of my favorite closet obsessions was Pokémon Pinball: Ruby & Sapphire.  I was never more than a very casual fan of Pokémon but that game had crazy replay value as you collected the little creatures the more pinball ass you kicked.  And I loves me some pinball!  Got to say, as shitty as these graphics are, not to mention how glitchy all the screens are on my cartridge, hearing "Part of Your World" even in this simplistic version is charming. 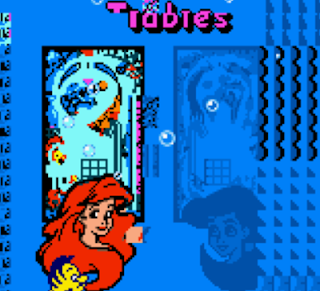 This game is based off of the 2000 film and thus there are two different tables to choose from: Ariel or Melody.  But I'm seeing red, if you know what I mean, so went with the Little Mermaid herself Ariel! 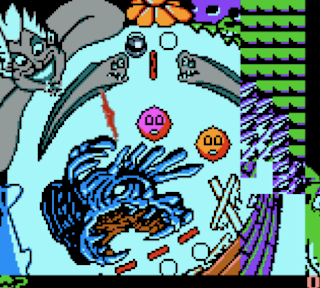 Here's the top-half of the table and it's not looking too terribly bad. 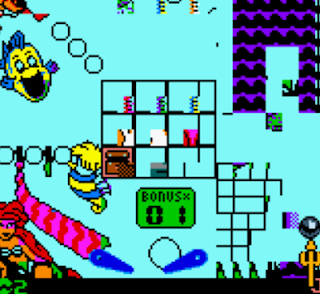 And this is the bottom, I guess?  Looks more like a kindergartner's scribbling and a beginner programmer's first failure.  The dynamics of pinball are all off and it's hard to get a good rhythm going.  Just like the title of Little Mermaid's arguably unnecessary sequel I'm going to "Return (this) to the Sea"!

Extreme Sports with The Berenstain Bears 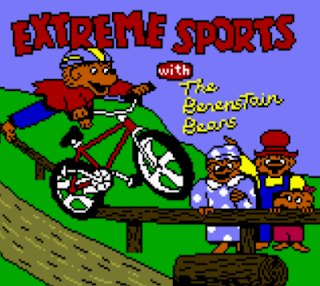 I didn't read many Berenstain Bears books growing up but am an extreme sports connoisseur (well, to be fair, I skateboard and used to be able to pull off some pretty cool stuff on a scooter) and this sounded too ludicrous to ignore.  I can imagine the sales pitch in some boardroom meeting: "Let's make them bears extreme!" 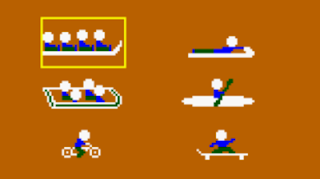 There's six different events to choose from.  So far so good. 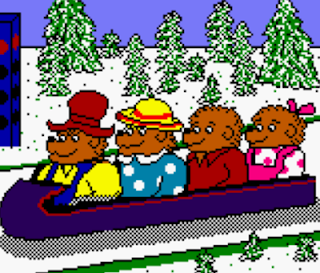 Why not start with bobsledding?  I caught 10 min. of Cool Runnings once on cable in '96. 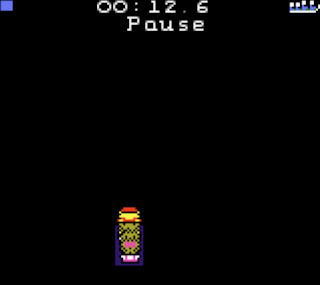 What the fuck?  Besides my makeshift team of casually dressed bears in a bobsled the entire background is black?  Who turned out the lights? 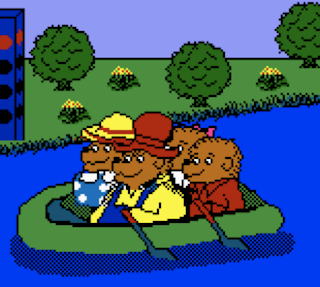 Never mind let's try white water rafting down some extreme rapids!  This should be a rush.

Black screen.  Again.  The only ones smiling are those damn bears at this point. 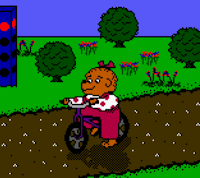 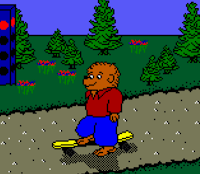 Here's some sports I can relate a bit more too: BMX biking and skateboarding!  Joyce Park near my house has a killer BMX bike course and I've been known to wipeout on a skateboard once or thrice.  Guess what?  More darkness.  Fail. 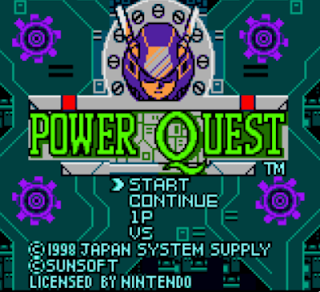 I needed one game that I knew nothing about.  A big risk.  Known in Japan as Gekito Power Modeler which doesn't tell me much but I'm intrigued. 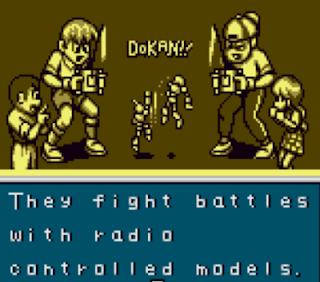 So right off the bat we're introduced to the story which is about young kids known as "modelers" who are swept up in a new craze of fighting with model robots.  I'm liking this already.

We get some more exposition as your character is at school as the bell rings.  You go home, mom tells you about a big battle championship coming up, you get a gift certificate in the mail, and then you're here at this old creep's shop.  There's five robots you can get but without a picture I went with the one with the coolest name: Axe (chosen over such gems as Borot and Gong). 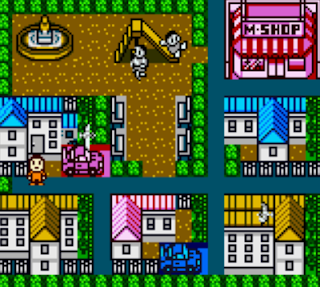 Next you get to walk around your hometown and this is again kind of cool.  You wander the streets and look for people to battle to earn some experience leading up to the big event. 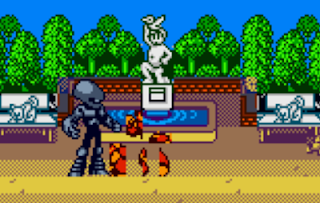 The playground is a great place to go bash some robot face.  Axe, my bot, is the grey one with the alien-like head.  We're a team. 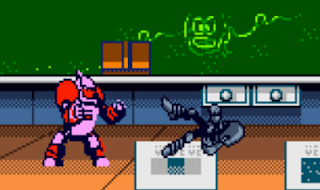 Here I am getting thrashed in the classroom.  So, yeah, this is pretty much that movie Real Steel come to life.  And it's great.  An RPG/fighting title and the whole concept of being a kid and collecting stuff like robots and running around fighting other kids I can totally relate to or at least enjoy on some personal level.  I haven't gotten too deep yet but apparently there's depth to this game and I'm excited to explore and conquer it.

So, there you have it, five games played and sashayed.  I may do this again down the road, lots of Gameboy games left out there to examine, or even branch out and grab some SNES or other titles.  Hope you had fun!  I've got some robots to ruin.
Posted by Brian at 11:07 AM No comments: 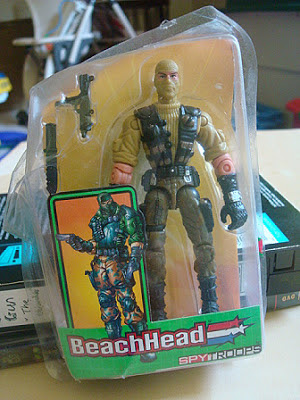 Beachhead, my old buddy!  It's good to see you again.  Some people upon hearing that name and if unfamiliar with the G.I. Joe brand may conjure up other mental imagery or memories like that night on Long Beach.  This is not that sort of beach, er, head.  I loved the G.I. Joe toys as an '80's kid.  My brother and I collected just about everything (including Army Ants) but my personal favorites were the G.I. Joe action figures.  Loved them.  Besides enacting my own large-scale wars and battles in my backyard (complete with swamps made with a gardening tool, water hose, and a little ingenuity) the size and articulation of that line made them perfect to enact wrestling matches on my bedspread or kitchen table, where I'd use that little plastic thing (pressure guard?) that came in the pizza box to keep the lid off of the pizza as a table to bash each other with. 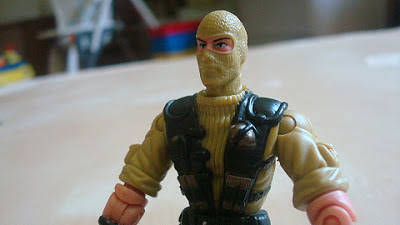 I've bought so much junk over the years for Review the World I often stumble upon things in our spare room (pronounce like  its the name of a magical land like Mr. Tumnus for some additional fun) I have no recollection of the origin for.  When/were did I buy this?  Where in the hell is the rest of the package? 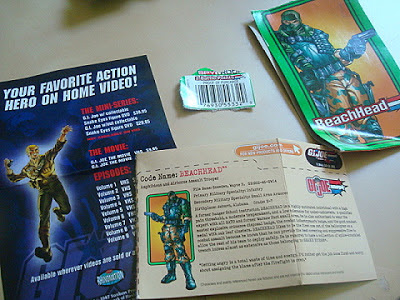 Now, upon "opening it" I discovered the package folded out to resemble something more closely resembling a traditional G.I. Joe package.  A truncated vertical one.  Still, there was a surprising amount of stuff crammed in there.  I'm leading to this being a Dollar General or Family Dollar purchase as you'll often see more popular toy lines sold there at slightly cheaper rates in smaller packages. 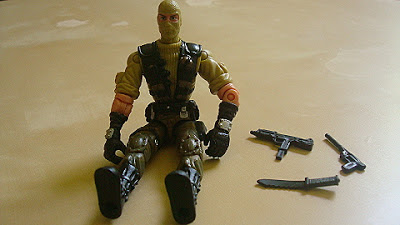 The toy itself is really great.  It's from the Spy Troops line which had a tie-in with a 2003 direct-to-video CGI film (Beachhead appeared in the film but I remember it more for introducing us to Agent Faces).  This is the fifth of fifteen versions of Beachhead made dating back to his original figure in '86.  I'd forgotten how much fun it was to play with a G.I. Joe.  While never one of my absolute favorites I have always liked the character in the different Joe media (comics, cartoons, etc.).  While Beachhead is sort of a strange moniker his real name Wayne R. Sneeden doesn't strike fear on its own but maybe a divisive chortle.  His bio card is fantastic with some choice lines including stating he's "a highly motivated individual with a high pain threshold, a moderate temperament, and a low tolerance for under-acheivers".  Sounds like my parole officer. 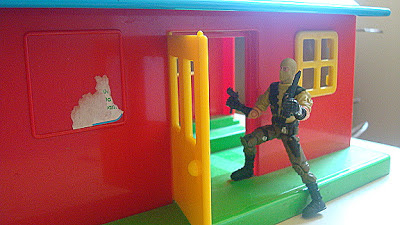 Beachhead went on a secret mission to infiltrate a barn he'd heard reported Dr. Mindbender was experimenting with mind control in. 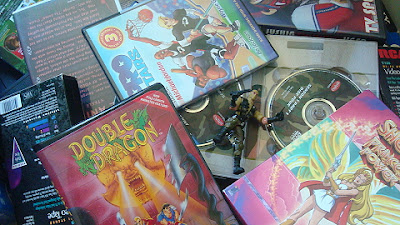 But he walked into a trap!  The floor was a trapdoor that released and dropped him 25 ft. below into a pit of... DVDs?  Yes, my son Owen apparently felt necessary to empty an entire crate of DVDs all over the floor so they served as Beachhead's undoing. 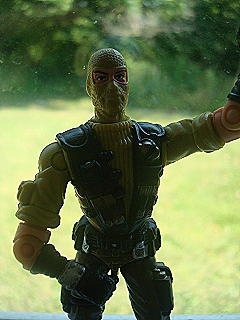 In closing, really great toy, he looks like a badass, pose-ability and movement are top-notch, and helped further rekindle my passion for G.I. Joe.  Last few years I've been content to collect the old series' on DVD and watch them on late nights but this totally makes me want to scour the Internet, thrift stores, and yard sales and bulk up on my toy collection again.  Yo, Joe!

Overall Grade: A
Posted by Brian at 10:25 AM No comments: