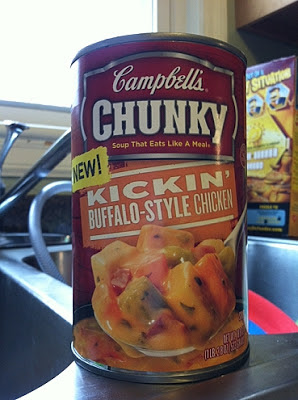 What is this you say?  Buffalo chicken... soup?  Get out of here!  Nope it's as real as Real Steel was unreal.  I've had a handful of the soups in this line and regrettably most taste the same.  Most of them are variations of meat, potatoes, some vegetables, and a thick, brown muck.  I saw a commercial that Campbell's was introducing 20+ new soup varieties so next time I was at the grocery I perused the soup aisle and grabbed a few cans of savory wet (new phrase I just coined). 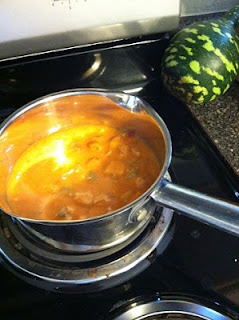 I couldn't find my digital camera in a hurry as I was preparing my lunch so I took these pictures using my new iPhone (thus they're not as sharp as I'd like).  But let's steer the focus back directly onto the soup.  First off, is it even a good idea?  I have to admit I had some serious reservations.  Look, I'm an adventurous eater, you take me into an ethnic restaurant, sushi bar, neighborhood deli, whatever, I'll gladly try two of the wildest thing on the menu.

But there's just something about those neon orange buffalo wings (or boneless wings as is usually my case).  I'm sure you've all had them, at BW-3, at Hooter's, some smutty sports bar, you know them and if you've had them surely they left some sort of impression.  They're not bad, don't get me wrong, in the moment, but they don't agree with most stomachs, from what friends have shared, and from what I've often encountered on the drive home from said establishments.  Thus, a thick, festering soup with the key ingredient or at least overarching theme being that very same blinding orange sauce sort of scared me.  Even pouring it into a bowl I had to sort of pep talk myself into going through with this. 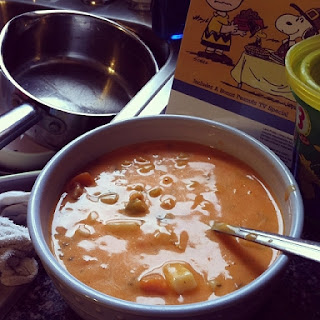 After the first bite I wasn't sure exactly how I felt but it wasn't bad and certainly not the taste torture I'd wrongly feared.  Soon I found that I was I starting to eat it faster, then faster, really devouring it in a way I never do soups.  I liked it!  Its thick and creamy and pleasant but the real joy comes from the slight singe and burn you feel in your throat after each bite.  People who don't like spicy stuff shouldn't be frightened away as while it does have a slight kick its more of a flavorful boost than any heat seeker's next conquest.  I didn't even mind the usually suspect and flavorless carrots and celery as everything tasted good swimming in the Kickin' Buffalo-Style witches' brew.  I'll definitely get this again, and while surprisingly good, not sure how well it'd hold up to multiple repeat meals as it could potentially wear out its welcome, but as an occasional treat it quickly jumped toward the top of the slippery, soupy pack.


Creator of Review the World Brian H. journeys from small town Hamilton, Ohio to Scotland with his friend Steve S. A multi-part travelogue detailing the trip with authenticity and fun.


The third and final episode of our ghetto re-imagining of the Batman mythos. This episode sees the series debut of The Joker, Bane, Crossbones, and Edward Nigma. See the Dark Knight as you've never seen before.
Posted by Brian at 7:08 PM No comments:

It's Friday and new episode time. This time, it's the first season finale of the Brian and Tim Show. Everything here is what's left on our computer, even some recently discovered footage from spring 2011. In this episode: expired Kroger gelatin, Mountain Dew Comparisons, Pringles in the bathroom, Amy's Breakfast Scramble Wrap, and a very odd assortment of ... dextrose candies?
Posted by Brian at 10:02 AM No comments: