Today's pair of reviews first features us downtown grappling with Sour Face Twisters Bubble Gum a truly tart tryst and then we jaunt to a summertime park to unsuccessfully attempt figuring out Doritos Jacked - Test Flavor #2653. Join us for this twosome that'll make you trill.
Posted by Brian at 12:41 AM No comments:

Japan By Way of North Carolina


Konnichiwa! While visiting Billy of VeggieMacabre at home in North Carolina we decided to attempt an edible odyssey. We trek to Japan via odd and uniquely local snack food from the "Land of the Rising Sun". Bare witness to us tasting Tokyo via Maccha Green Tea Kit Kat, Lychee flavored Ramune soda, and Calbee Hot & Spicy Potato Chips!
Posted by Brian at 6:03 AM No comments:


Two things that nature didn't want combined spicy and gummy. Found at a dilapidated corner store in a bad part of town Nick brings forth these flaming follies. Speckled with sugar and spices these fruity gummy snacks promise to raise the temperature a few degrees. Can we attempt this feat and stand the gooey heat?
Posted by Brian at 8:56 AM No comments:

I was at home the other day on my laptop losing track of time. Falling down the rabbit hole procuring films from Renoir, Murnau, Dreyer, Ozu, Fellini, Godard, Truffaut, Bergman, Tarkovsky, etc. from an inter-library loan system for a 1,000 Greatest Films list (don't forget I post near daily movie reviews here) I'm beginning to work through I was broken from my trance when my wife arrived fresh from grocery shopping. As I was helping unload the groceries seeing the familiar items I'm accustomed to I reacted like an old lady seeing a specter when I stumbled across a very green bag of Lay's chips. 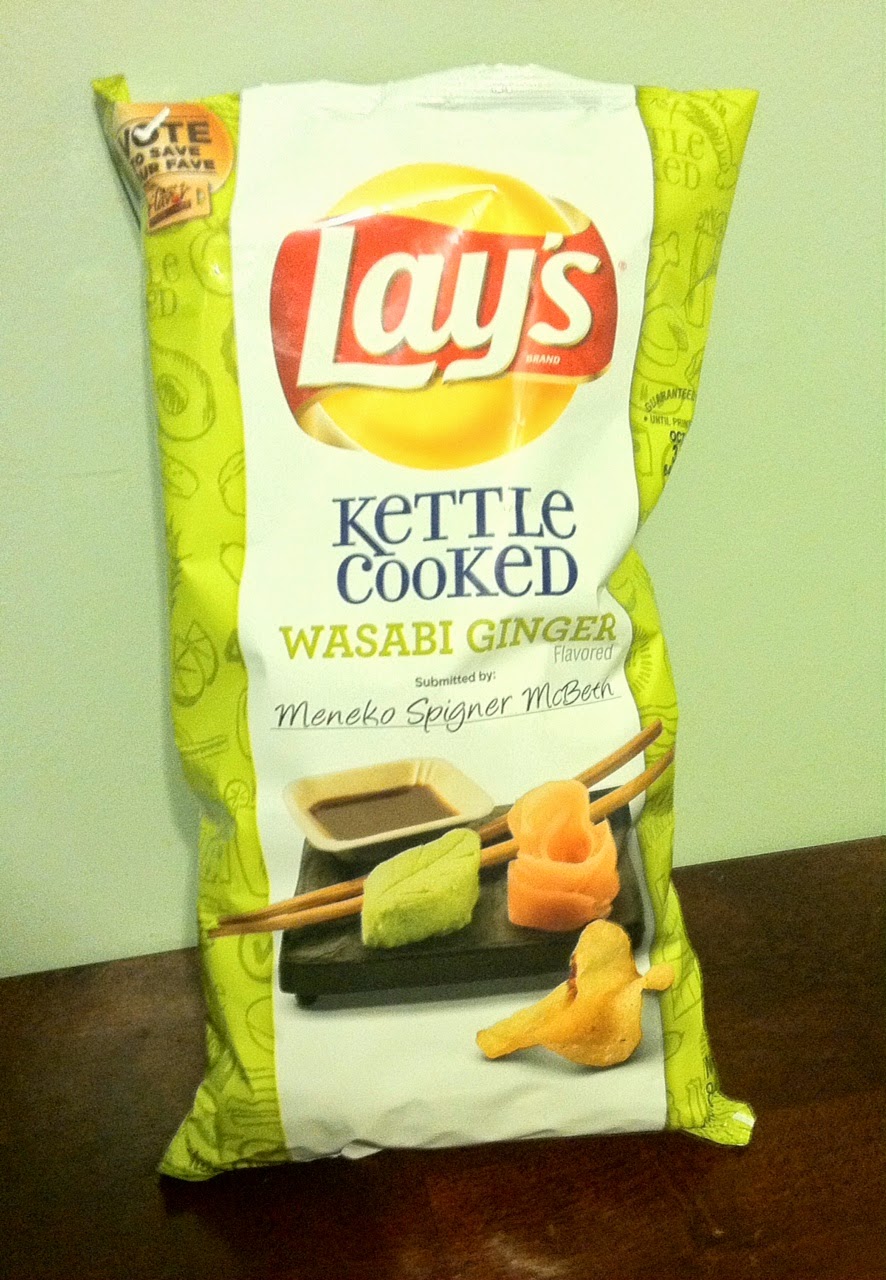 Behold! Lay's Kettle Cooked Wasabi Ginger chips! What a sight for sore eyes. I'm beholden to companies when they release new and especially unique or unusual flavors of familiar products like chips and soft drinks. But more personally I'm a sushi fanatic so seeing a flavor that falls within my own personal wheelhouse I was as surprised as I was in 2011 when The Artist beat The Tree of Life for the Academy Award for Best Picture. Except I wasn't throwing a frozen burrito at a TV screen this time. 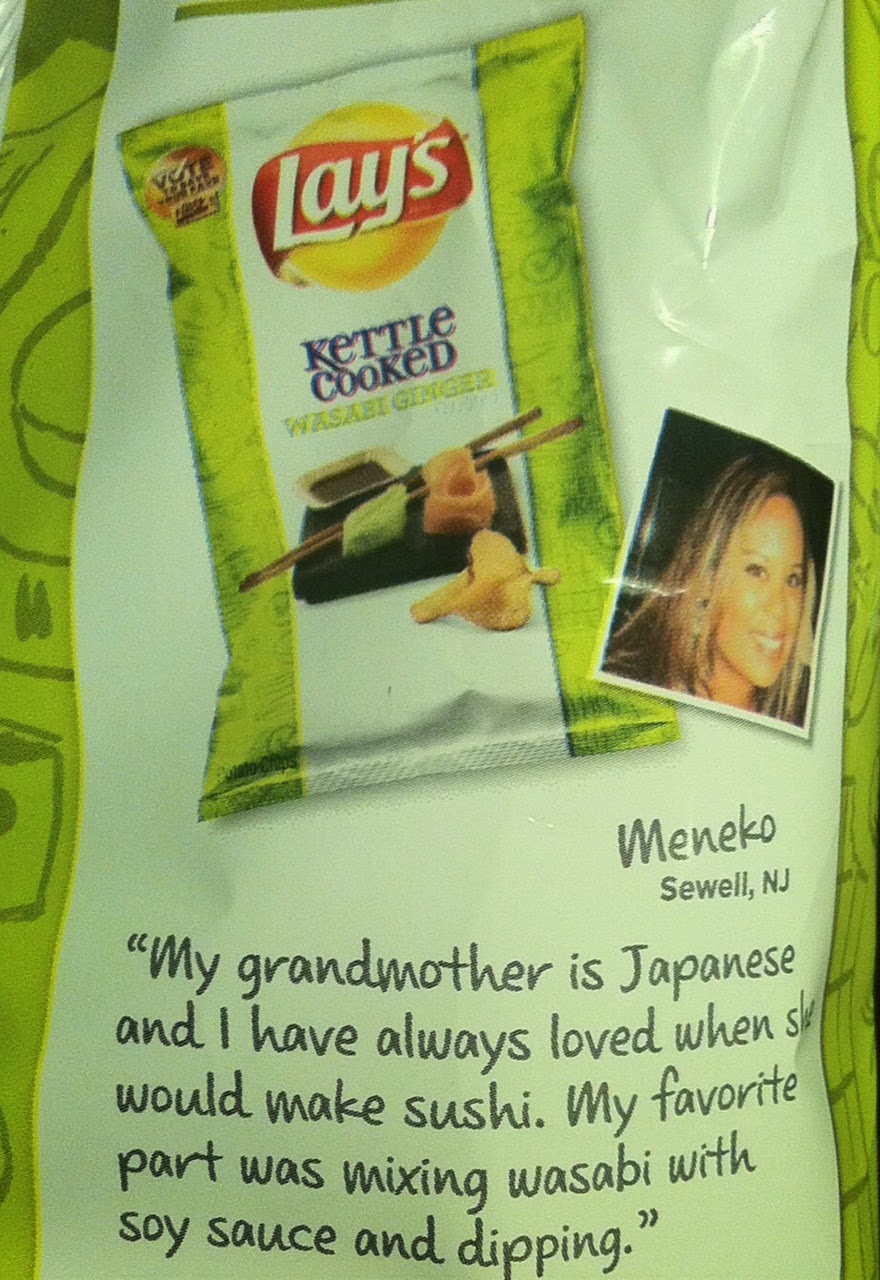 Here's a little backstory on this particular flavor a fan-designed taste treat from Jersey. Wasabi isn't entirely new to snack foods as Blue Diamond makes damn fine Wasabi & Soy Sauce Almonds that you can get in smaller packets or larger canisters. Those things are the bomb! Even people that are unfamiliar with wasabi or sushi find them oddly enticing. So the bar is set and quite high for a wasabi starring junk food.

As mentioned earlier I'm a big sushi fan. In fact just two days ago here on Review the World I posted a video review of a sushi restaurant. I probably didn't get fully enveloped into the world of this delicacy into around college when I discovered a couple "all you can eat" buffet-style sushi places (sadly both have since closed likely not the best business model). Sure, some grocery stores sell it packaged but it's likely cold and sticky and far from what a sushi experience deserves to be. Some higher-end grocers sell daily prepared stock that they whip out throughout the day which is a step-above but unless you're in a rush and craving it fiercely it's better to make a trip to an actual sushi bar to fully appreciate both the food and ambience. Some will dip their toes in by sampling sushi at the more popular and common Chinese buffets and that's alright but know from experience that the "sushi" found on most big buffets is generally a 2 on a scale of 10 and that may be generous. So my push is for long-standing fans or those curious or even perhaps fearful is to visit a real sushi bar be it an old school bamboo-floored quiet and calm traditional locale or a more modern and sleek (sushi is en vogue at the moment so they're popping up) establishment to get a real experience.

Away from the actual sushi itself (which this isn't flavored as -- although that'd certainly be interesting I can only dreamily imagine an "ikura" or salmon roe-flavored chip) this chip is flavored like wasabi and ginger. Meneko tells a tale of yesteryear where she'd mix wasabi into her soy sauce to make a heavenly dunking spot where she could give her sushi morsels a bath in liquid nirvana. I don't know why I've never thought of that. But damn it I'll try it next time! I tend to put a small dab of wasabi (pea-sized) on each piece of sushi as a little goes a long way (if you've never had wasabi it has that horseradish sort of heat that hits you in the nostrils and not so much on the tongue like spicy food). I use soy in abundance though dunking each piece in with glee. The pink ginger slivers you get with sushi (and pictured above) I've generally avoided. Some people eat it but I've often heard it used as a palate cleanser where you just nibble a tiny bit. It's flavor is strong but I fret I'm not familiar enough with it to rightly describe it in any detail. 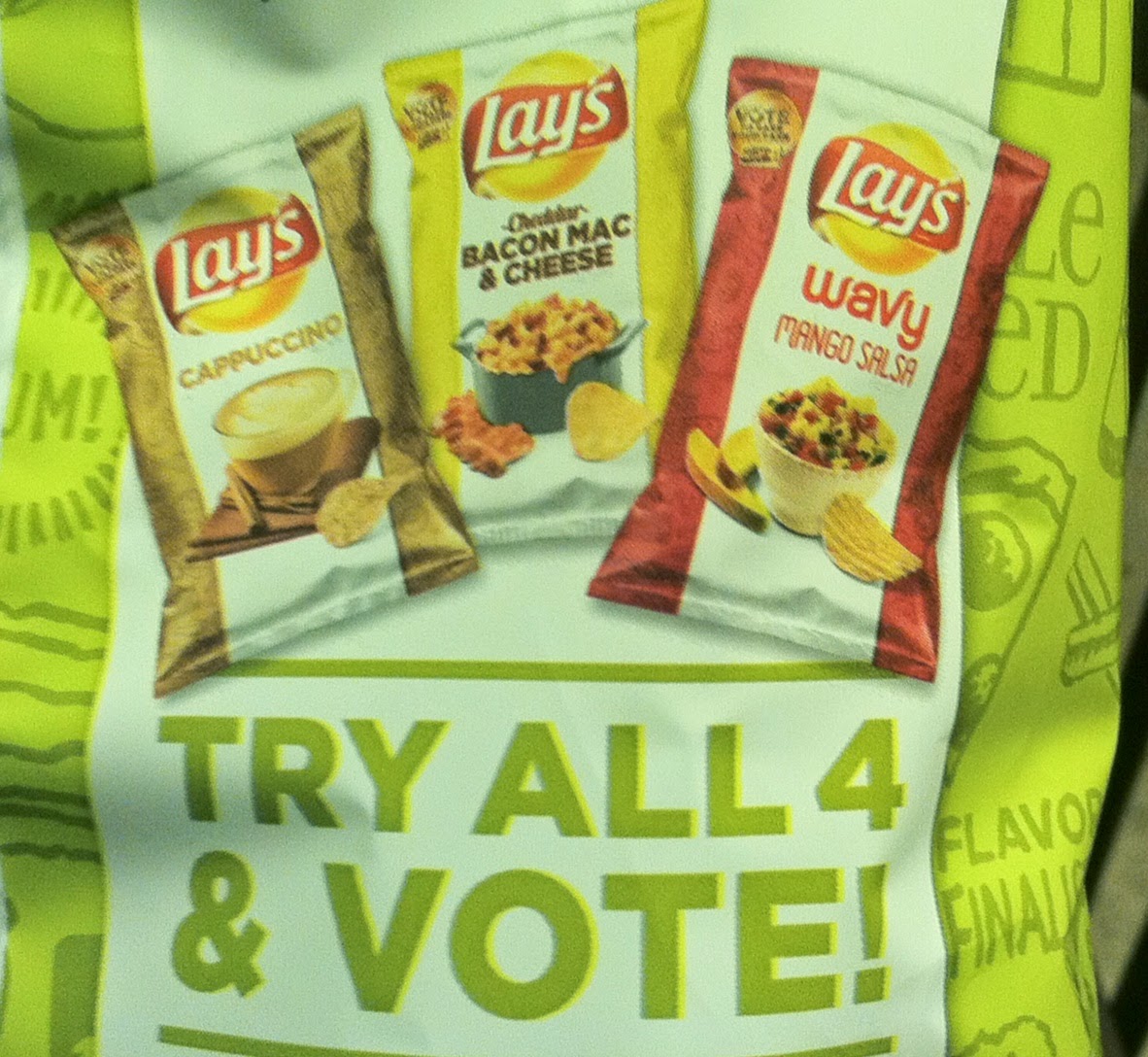 The last time Lay's ran this promotion my favorite by a landslide was the Chicken & Waffles flavor a great blend of savory and sweet. This time the line-up is very interesting. I also like that instead of all flavors being standard Lay's they've mixed it up making one flavor the Wavy-style and the one I'm sampling today the Kettle variety. Cappuccino may be making the most waves online for being zany but I'm not that interested. The Bacon Mac & Cheese I'd certainly try but don't see it having long-lasting appeal. Mango Salsa I'm probably most curious about out of the others as real mango salsa is a delicious dish with bright flavors that could be quite good if captured successfully in chip-form. I opened the bag and while there was a strong noticeable scent I didn't figure it into my grading curve as chips aren't generally known for being particularly special or noteworthy in aromatics. As you can tell the chip-to-dead space ratio in the bag isn't favorable from this consumer's perspective but not surprising given industry trends. The medical white instead of foil lining calls to mind spaceship food to me for whatever reason. I'm sure astronauts enjoy Spicy Salmon rolls too. 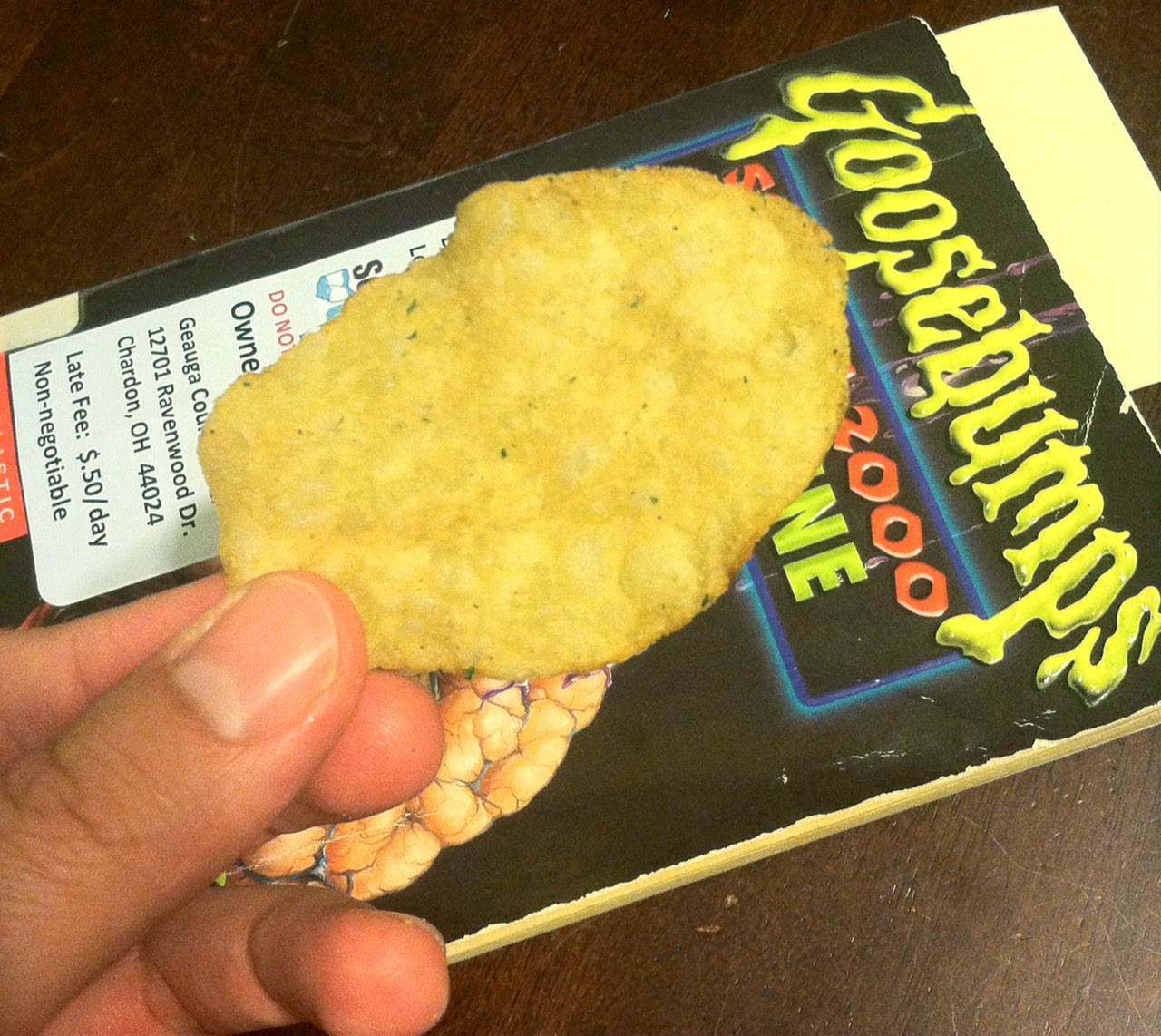 The first chip. I was cautiously optimistic but very eager to dive in. And yes, that's a copy of Brain Juice on my kitchen table. Keeps me young. 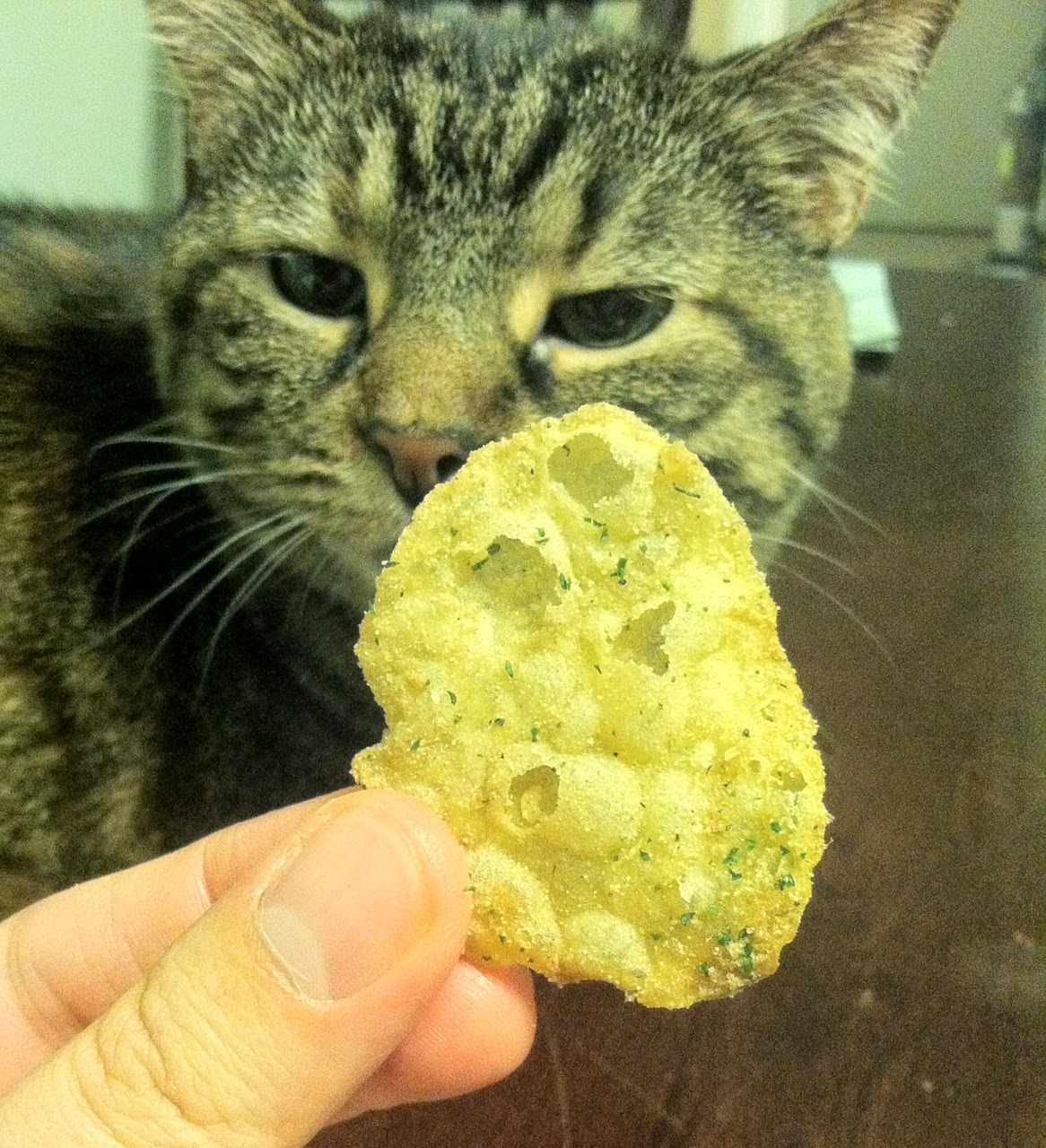 Not all chips are created equal. This one was saturated in powder and seasonings. Tomo was eyeing it intently. For those of you more familiar with my videos and less so my written work you'll find Tomo a lot in some old articles including A Surprise for a Boy and Crayola Silly Scents pencils.

Verdict! These are good! Really good. I hope they stick around although my faith in Americans choosing wasabi over bacon is ridiculously low. So buy them now! I also urge you to eat more than a few if you want to really give them a fair chance. I thought the first few were good but it wasn't until I'd snacked on them for awhile that I really felt I'd unlocked the flavors and could actually give real overall thoughts on them as a snack. These have a slightly salty finish with the zesty light bite of wasabi and although soy is referenced on the bag but not included in their namesake I feel like on the back-end there's a nice splash of that most delicious of salty sauces. These definitely work as Kettle chips and now having had them in this form I can't imagine them as standard Lay's (and don't want to). The crunchiness and texture of the Kettle chip really compliments the bright flavors creating a dangerously snackable chip that I found hard to stop eating. I'm a pretty tough judge on new snack foods (see my disappointment of Lay's BLT chips here) so liking these this much instantly puts them in the upper-echelon of newer offerings over the last few years. If you try them leave your thoughts in the comments below or over on the RtW Facebook!