It's the season finale for the second season of Brian & Tim Show and we're doing it up big and random with a half-hour for that ass. Crab-seasoned Crabbers snacks, ToffeePops, Apothic Rose goth wine w/ Chris of RtW, Redakai Trisquad toy, Story Time w/ Tim, and Herr's Buffalo Blue Cheese Curls. Enjoy!
Posted by Brian at 9:24 AM No comments:


Brian and the RtW gang try some peculiarly flavored Bacon Cheddar Cheese Curls out on the streets in the middle of the night then sample a military inspired energy drink named Tribute from Rip It that may just be the secret return of Surge? Watch it with the door locked.
Posted by Brian at 11:03 PM No comments:

Here we go! I've teamed up with Matt and Billy once before for our epic Five for $5 Dollar Store Challenge. When Matt shot me a message about tackling "food court Chinese", a topic he knew was already dear to my heart and well within my personal wheelhouse, I said yes, in fact similarly to Daniel Bryan, I screamed, "Yes! Yes! Yes!" And this time a total of five of us bloggers are joining in on the festivities!

I've covered Chinese food, and Chinese food inside food courts previously, actually dating back to Review the World's inaugural year in 2005. Nowadays at least 40% or more of the times I eat at food courts, be it flying solo or with my family, I'll opt for some indiscriminate chicken morsels bathed in a brownish glow and a side of noodles or rice. It usually seems like a good enough idea at the time. Typically by the end of the meal you begin questioning your moral compass. 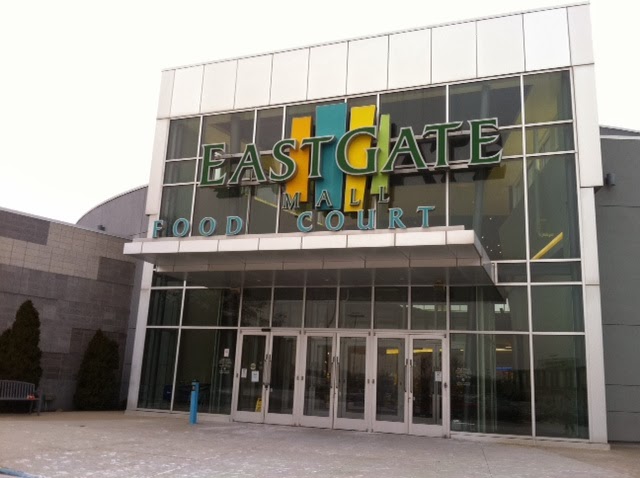 I've got three malls very close to my palatial house and three more within driving distance beyond that. I really grappled with which spot I wanted to visit for this assignment. As many of you may know the northeastern United States got hit with some seriously frigid and potentially dangerous arctic weather last week. As a result (and also due to one of our cars being at the mechanic's) I was stuck inside for two days totaling 27 hours alone with my two babies while my wife worked. Needless to say the next chance I got free I made a break for it! To get a little quiet "me" time I hit the road and drove toward Cincinnati proper to EastGate Mall. It's about an 80 min. drive roundtrip so a bit of a hike but in this case worth it. Of all the local malls this was the last one I got around to visiting only first discovering it a couple years back after having heard its name over the years. The first time I entered the mall this was the entrance I chose at random and to my delight it entered directly into the food court! So I retraced those fateful footsteps once again to do some culinary research. 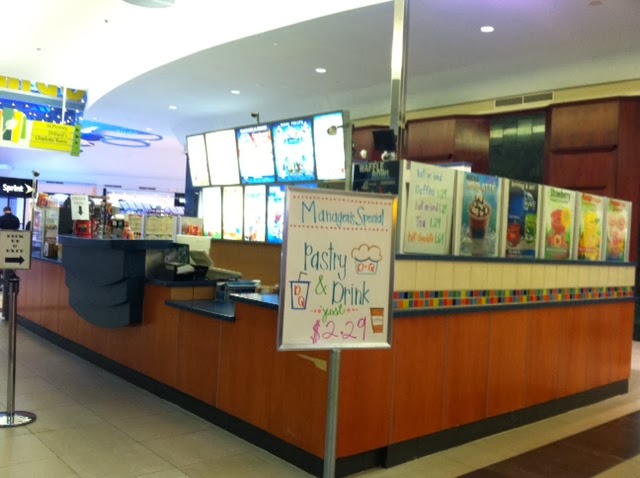 I actually bypassed the food court for a quick jot down to Orange Julius. Yes! We don't have Julius' back home. So whenever I get out to EastGate it's a must. I usually get the standard Orange Julius which is a creamy concoction that drinks like an oranges and cream popsicle in foamy juice form. In my mind I like to imagine its comparable to an Orange Lazarus from The Adventures of Pete & Pete. 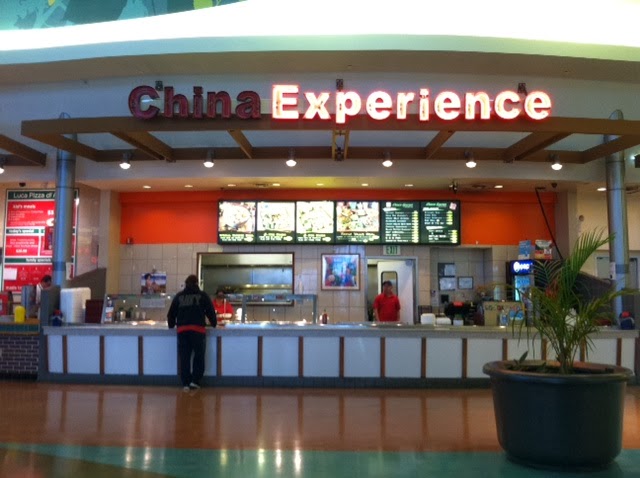 And here's why we're all here! Food court Chinese! A unique breed, an oft times adventurous dining decision, and conjures an allure all its own. Bathed in fluorescent neon light and usually known by passerby for the shouting workers beckoning you with meat chunk samples on toothpicks this is it. Unfortunately that poetic prose I just whipped up doesn't really suit the accompanying image as half of the neons aren't even working and the mood in here was rather calm. Notice the cook staring directly at me. 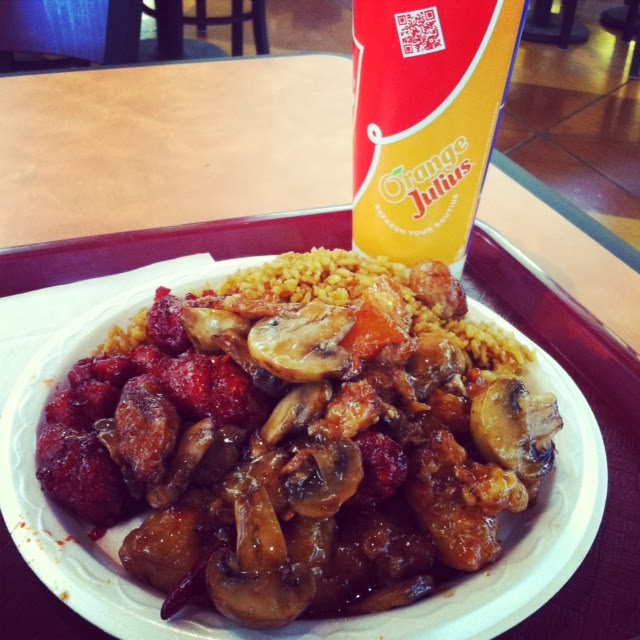 The money shot. I used the Instagram version with the filter to better immortalize it. I got a three item plate (Hey! I was hungry!). 3 chicken entrees which I'll detail momentarily, fried rice, and my aforementioned Julius. It needs more vegetables surely as no plate of food this big should all be one color: welcome to food court Chinese. 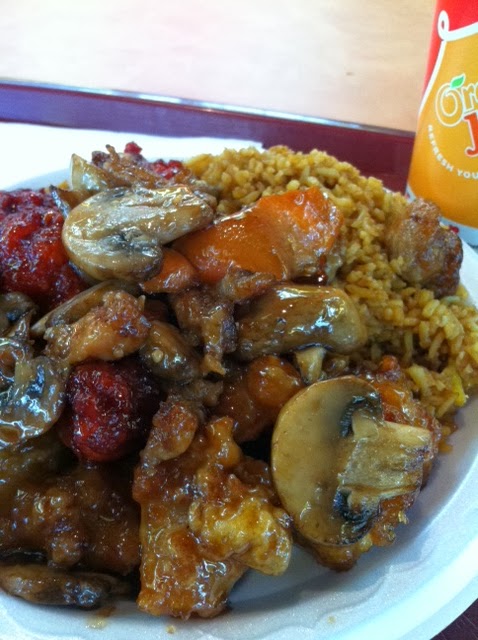 An aerial overview. Since Chicken and Mushrooms was my third item ordered they just dumped it on top of the rest. This is a pretty standard menu item at most food court Chinese joints I've encountered. Even the bigger chains like Panda Express (which opened a standalone brick and mortar store here awhile ago) carry it. It's a nice reprieve from the more popular breaded items as its less heavy and a pretty simple formula of chicken breast, mushrooms, some shaved carrots, etc. tossed in a sauce. 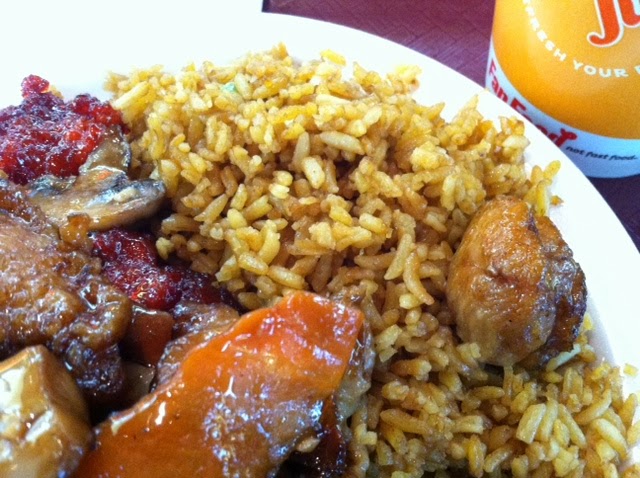 Next I wanted to show off my fried rice. Well, maybe "show off" isn't the right term. I did want to show it in all its overcooked infamy for posterity's sake. 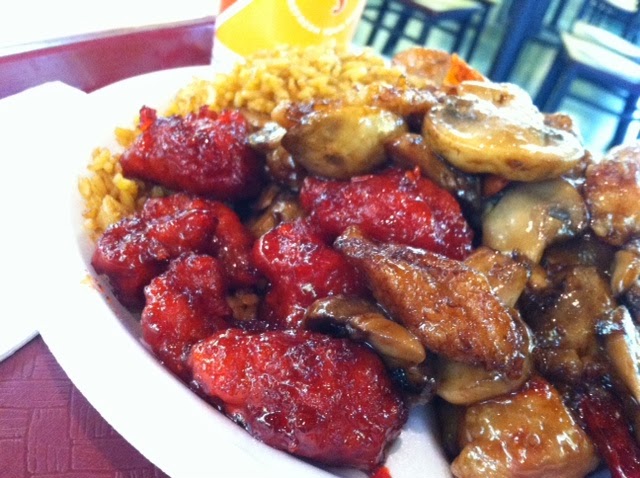 The red pieces here are General Tso's Chicken. Buried to the right is Orange Chicken. I generally try to avoid two of the similarly breaded varieties of chicken due to sameness and getting the occasional funky piece. The stuff that's not breaded and therefore you can actually see the meat with your own eyes is usually the better call but it's hard to not get at least one of these guilty pleasures each plate. 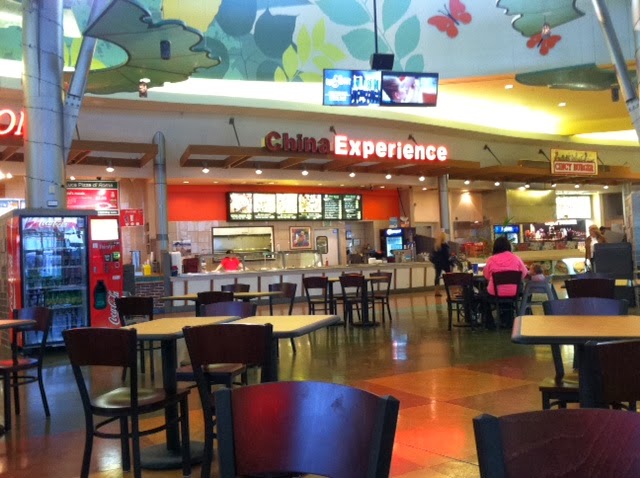 Here's another shot of China Experience from my vantage point seated. I do love that name. It guarantees it'll certainly be an experience. 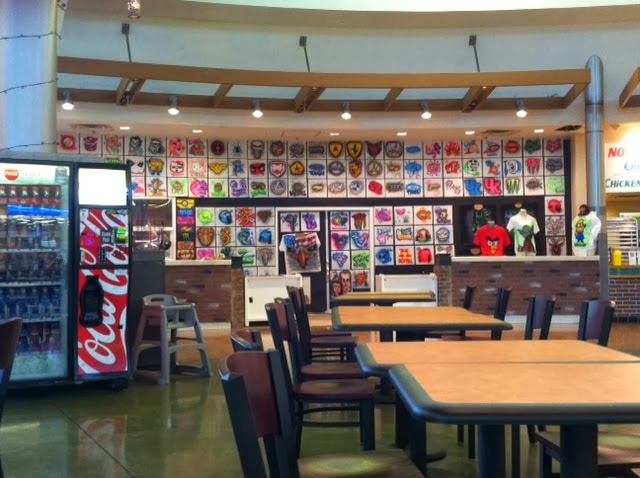 To my left I saw a custom airbrushed t-shirt shop. For a split-second I'd considered going over there and plunking down my two bits and ordering a custom shirt featuring Miss Piggy drinking a Mai Tai in the back of a stretch limo with the nWo Wolfpac. 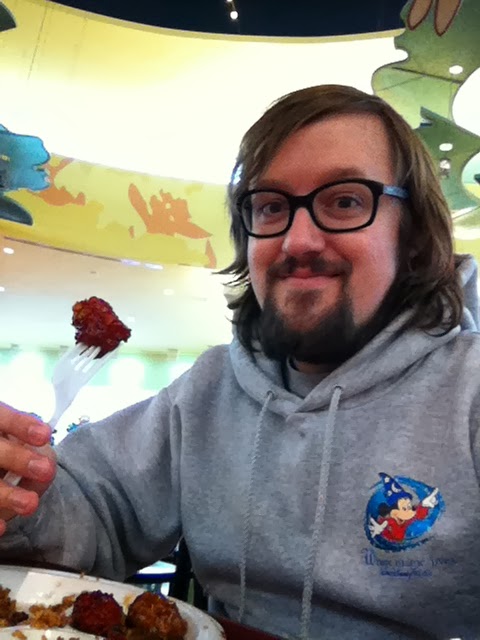 Here I am, hair shaggier than ever, documenting this momentous occasion. This bite is, or was, for you Matt, Billy, Molly, and Jay! 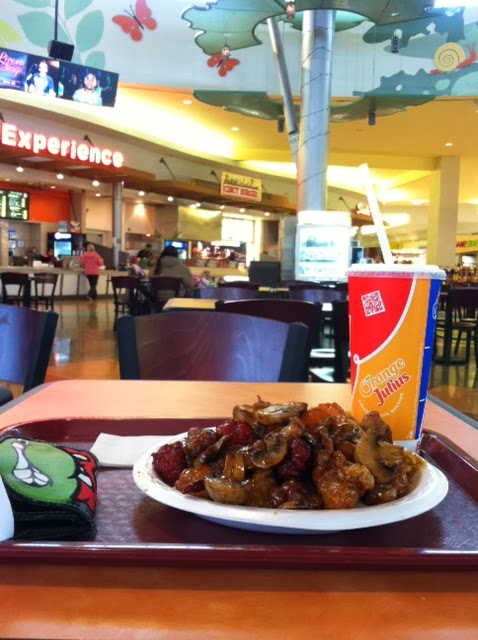 So how was the food itself? RtW has for better or worse always been about the scores. On this occasion I'm going with a firm B which, in the realm of food court Chinese, is a pretty nice mark. General Tso's gave things a little more flavor with a touch of spice, Orange was fine but pushed to the background, with the Chicken and Mushrooms dish undoubtedly the leader of the pack. I didn't venture too far outside of the norm but variety isn't really these type of place's strong suit. 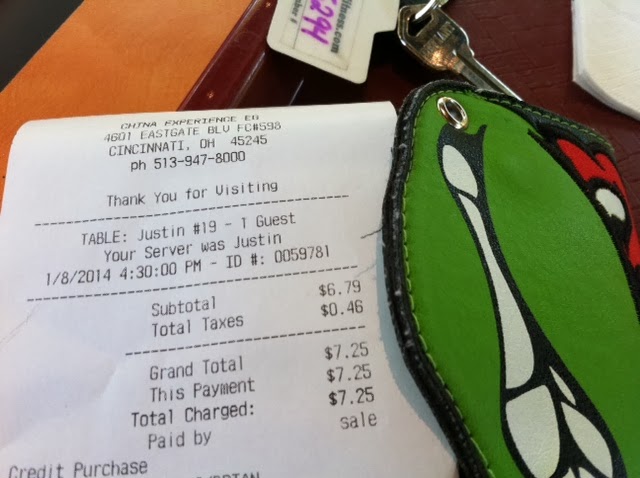 Here's a shot of my receipt and my Wally. Hey, I think I just named my wallet! You witnessed it right here. Consider yourselves privileged. I actually just switched out wallets for the first time in over a decade recently as my old Superman wallet had withered into tattered shreds. $7.25 seems about fair if not a touch high. A reasonable enough price but when you can go to an all you can eat Chinese lunch buffet for less it makes Wally sad. Convenience is key in this case though and that's part of the charm of food courts. 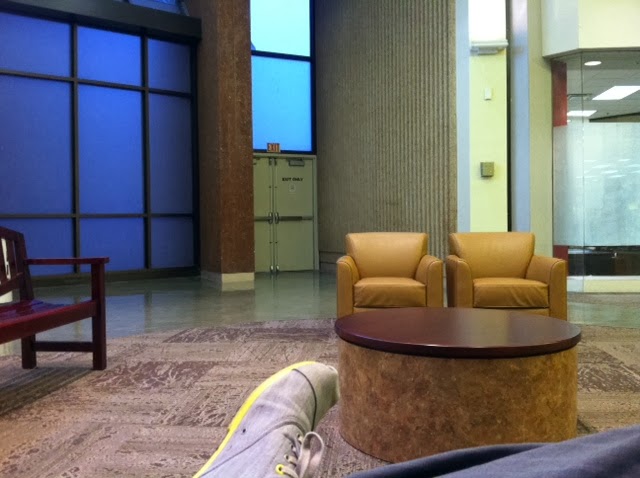 I found a relatively quiet spot and hunkered down for some meditative thought post-dinner. It looks like a corridor from an airport strangely. I did not take flight.

So now that you've read and re-read my experience at China Experience go see how the rest of our gang faired! Thanks so much for reading!

- Billy from VeggieMacabre!
- Matt from Dinosaur Dracula!
- Molly AKA Swagger Mom!
- Jay from The Sexy Armpit!
Posted by Brian at 12:23 AM 49 comments:


An RtW fan sent us a gigantic box of Zapp's potato chips so over the next few months we're going to go through each flavor and review it with a fierceness! This time around we sample Sweet Creole Onion, Sour Cream & Creole Onion, and Regular flavors by the river in downtown Hamilton, OH and at the Fitton Center for Creative Arts. Enjoy!
Posted by Brian at 11:38 PM No comments: